Don Mattingly and returning to the scene of the climb 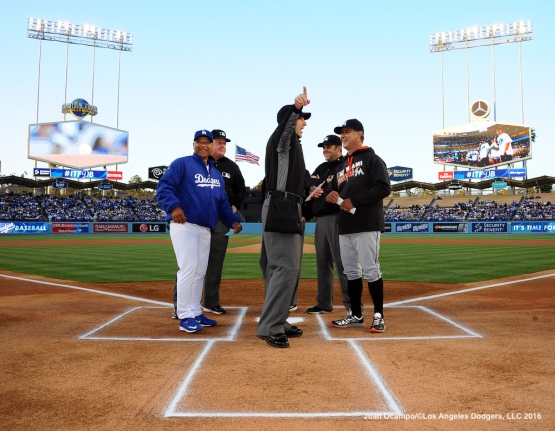 It’s not that you can’t go home again — it’s just so strange to do it.

I left my first full-time job, at the Los Angeles Daily News, in March 1992, a month before this city’s riots began. That night, I went back to the Daily News offices in Woodland Hills, drawn by the urge to be a part of the action, though I was more like a ghost, floating from the editorial offices to the backshop as a nearly invisible witness with no actual purpose.

Ten years ago, I left my job at the Los Angeles County Museum of Art. Ten years later, it’s still weird to go back, even though most of the people I worked with have since departed as well. I wouldn’t say I go out of my way to avoid LACMA, but I don’t go out of my way to return, which is a little sad considering how great a place it is. After you’ve spent enough time behind the scenes, it’s just discomforting to be there, I don’t know, in front of the scenes.

From LACMA, I went to Variety, working there for seven years, until I came to the Dodgers in December 2013. Variety moved offices a month after I left — in fact, it moved so close to my house that it’s just a healthy walk from my front door — and though some have gone, many treasured colleagues remain there. And yet, I’d say I visit only once a year, for a quick hello, except that when you multiply quick hello by a couple dozen people, it becomes something much more, like a happy reunion episode of the cast of an old TV show. And though it doesn’t show on the outside, it’s emotional.

On none of those return visits did I actually have a job to do, much less a job that involved beating the people who were my colleagues, or who remained my friends. On none of those occasions did the media interview me, or construct narratives about how I felt — or, despite what I might have said, how I really felt.

I feel like a fish out of water whenever I retrace my work steps, but I have to imagine that’s easier than feeling like a fish in the bowl, with everyone staring as I swim back and forth, looking out of both sides of my head, to see if I’ll bump against the glass.

That being said, Don Mattingly hardly seemed to mind. 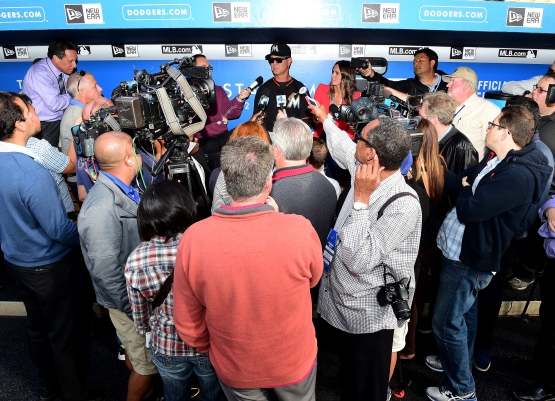 Mattingly’s return on Monday to Dodger Stadium, almost exactly six months after he and the Dodgers ended a seven-year relationship, the last five as manager, seemed orderly enough, if you can count a smothering scrum of about two dozen reporters playing 20 questions with him in the Miami Marlins dugout as orderly. One thing I couldn’t help notice was that as the 20-minute session began, the weather was L.A.-dry, the Three Sisters pretty but providing little comfort as my neck baked in the sun. But by the time it was over, dark clouds had poured in, the wind had kicked up and it seemed like we had somehow journeyed into a South Florida afternoon of climate uncontrol.

Not that it mattered. The weather wasn’t a metaphor for Mattingly’s journey. It was just weather.

Mattingly did seem relaxed and pleased with where he was. But during the time I knew him in Los Angeles, Mattingly never struck me as someone who wasn’t relaxed and pleased with where he was. If he had bad days in Los Angeles, I’m guessing he’ll still have bad days in Miami. If he ends up having a more rewarding experience there, well, isn’t that how it should be? We strive for career growth, but that doesn’t mean that we need to lay waste to the past.

If anything, it becomes easier to see the past for what it is.

“Pretty much everything here was a positive experience for me, other than us not being able to take it to the next level,” Mattingly said. “Great relationships, people, a lot of really good memories.”

I think most people inside and outside the organization are comfortable with the idea that October 2015 was a good time for Mattingly and the Dodgers to part ways. Not because Los Angeles bad, Miami good or Mattingly bad, Dave Roberts good. Because people and workplaces are complicated, messy things, and they work best when needs and desires and abilities all mesh, and when people and workplaces are growth-oriented, they can, quite simply, grow apart.

In the accelerated dusk before Monday’s game, Mattingly was asked what it felt like to return to Dodger Stadium, what his takeaways were, and so on and so forth. He was asked veiled and unveiled questions about his relationships with the Dodger front office, with Yasiel Puig, with the job he had.

I have little doubt that a flood of thoughts poured through his head, before, during and after that press session, running the gamut of emotion, while fighting for space with a need to look not back, but ahead.