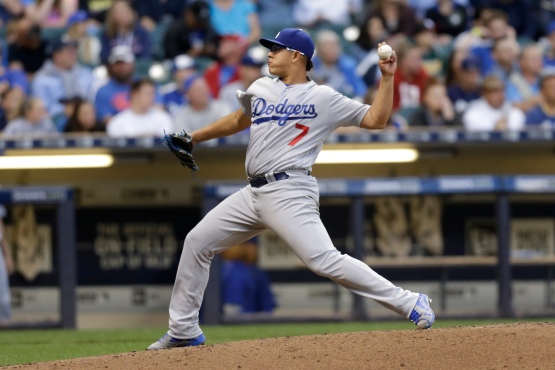 Reaching six innings and 100 pitches (exactly) for the first time in his MLB career — and adding his first big-league hit and a National League record for pickoffs in the process — Urías also picked up his first win, with slump-busting performances by Adrián González and Trayce Thompson helping boost the Dodgers to a 6-5 victory at Milwaukee.

Urías, who neutralized his walks by allowing only two hits, lowered his ERA to 4.09 and finished a month of June that had to exceed almost anyone’s expectations. In 30 1/3 innings, Urías allowed 12 earned runs on 28 hits and 11 walks, while striking out 38.

What was so surprising about tonight’s walk total is how it broke form with the relative control he had been showing. Though his pitch counts have been high, Urías had walked exactly one batter in his previous five June starts.

But nearly every time tonight, Urías had an answer for the walks.

In fact, after free-passing leadoff hitter Jonathan Villar, Urías picked him off. And when that was overturned by replay review, Urías simply threw to first to pick him off for reals.

Speaking of precocious feats: This was the fourth game in a row Urías picked a runner off, which tied an NL record shared by Fernando Valenzuela (1982 and 1983). Almost as remarkably, Urías is tied for the MLB lead in pickoffs this season.

Urías would continue to sprinkle walks throughout the game, but only when Ryan Braun hit a two-run double in the third inning did that cost.

Braun’s double tied the game at 2, but the Dodgers moved back ahead within moments.

In the fourth inning, González followed Corey Seager’s triple with an RBI double, putting the Dodgers ahead to stay. Joc Pederson added a two-out RBI single in the inning, as did Urías. Yasmani Grandal contributed his second RBI of the night in the fifth.

González, who skipped two starts in a row to regroup at the plate in the midst of a .518-OPS month, went 3 for 3 with a walk and a hit-by-pitch.

Thompson, who had been 0 for 19 with a walk in his past seven games, went 2 for 4 with a walk. Thompson also stole second and went to third on an error during the Dodgers’ two-run second inning, with Gonzalez scoring from third on the play.

Despite a three-run scare in the eighth that included a wall-crashing injury to Pederson, Urías became the first Dodger to walk at least six and get a win since Zack Greinke in 2013. Kenley Jansen struck out two in a perfect ninth.