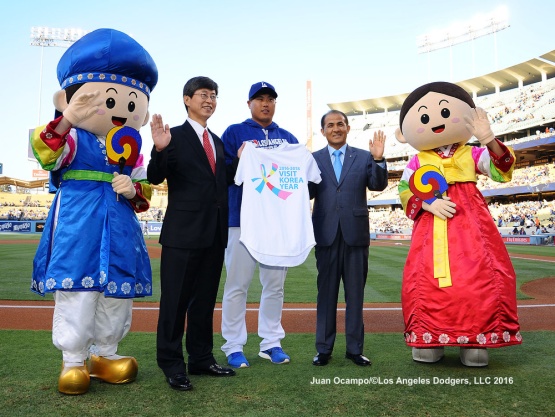 Hyun-Jin Ryu was recognized by Korean consulate general Key-Chul Lee and director of Korean tourism Tae Shik before Tuesday’s game against the Orioles.

As presaged three days ago, Hyun-Jin Ryu has officially been activated by the Dodgers, who also promoted Carlos Frias from Triple-A Oklahoma City to support their heavily used bullpen.

To make room on the roster for the two right-handers, the Dodgers have designated outfielder Will Venable for assignment and will send reliever Luis Avilan to Oklahoma City.

Frias was recalled June 19 by the Dodgers but did not pitch before being optioned June 21 back to Oklahoma City. Since then, he has allowed three runs in 12 innings with two walks and seven strikeouts, including two outings of at least five innings. He made 17 appearances for the Dodgers in 2015, 13 as a starter.

Avilan retired six of seven batters he faced over the past two games, striking out three. Venable is 1 for 18 as a Dodger with no walks and five strikeouts.

“To expect what (Brandon) McCarthy did the first time out, that’s a high expectation,” Roberts said, “but I know Ryu’s going to do everything he can to give us a chance to win tonight.”

Corey Seager to slug away in Home Run Derby

A look back: Walter Alston put the man in manager