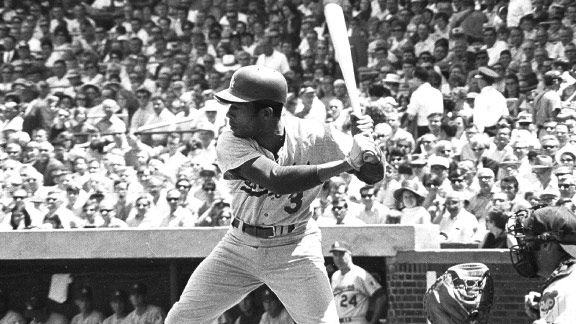 Rogers Photo Archive/Getty Images
Willie Davis in Chicago in 1969, the year of his 31-game hitting streak. Walter Alston can be seen in the background.

Ben Platt of MLB.com covered today’s memorial for Willie Davis at Dodger Stadium. The Associated Press also has a report.

Tony Jackson of ESPNLosAngeles.com has a wonderful feature on Jamie Jarrin.

Ernie Harwell, whose departure from the Brooklyn Dodgers broadcast team paved the way for Vin Scully’s arrival, will be honored with the Vin Scully Lifetime Achievement Award in Sports Broadcasting.

Harwell, acquired by Dodger chief Branch Rickey in an actual trade for catcher Cliff Dapper in 1948, is 92 and suffering from inoperable cancer. He then joined the Giants in 1950 and was replaced by Scully. He gave a memorable farewell speech to his Detroit Tigers fans last September.

Hi! My name is Hannah Mitchell and I am 8 years old. My dad works for The Times, and he asked me to write a blog sometimes on the fun I am having in Vancouver for my first Olympics. If this is boring to you, blame him. And I want to say hi to all my classmates at Sonrise Christian in Mrs. Doolittle’s class. Yes, Mrs. Doolittle, I am doing my homework. And hi to Mrs. K, Mrs. Free and Mrs. Ambrose.

On my first day in Vancouver, I already have had two really fun things happen: I was interviewed by a TV station and I saw the prime minister of Canada, Stephen Harper. …