On the same day that Aaron Harang signed a $12 million Dodger contract that will pay him $3 million in 2012 and $7 million in 2013 (with a club option for 2014 that comes with a $2 million buyout) , the Dodgers traded Dana Eveland to Baltimore.

Eveland, who allowed 36 baserunners with a 3.03 ERA and 16 strikeouts in 29 2/3 innings for Los Angeles in 2011 but was not likely to be tendered a 2012 contract, went to the Orioles in exchange for minor-leaguers Jarret Martin and outfielder Tyler Henson.

Martin, a Bakersfield native, has walked 5.9 batters per nine innings in his two-year minor-league career, but the lefthander has also struck out 8.7, so the Dodgers will see where his live arm takes him. As Chad Moriyama notes, there is some upside. Henson, an outfielder who turns 24 next week, had a .634 OPS in Triple-A this season. 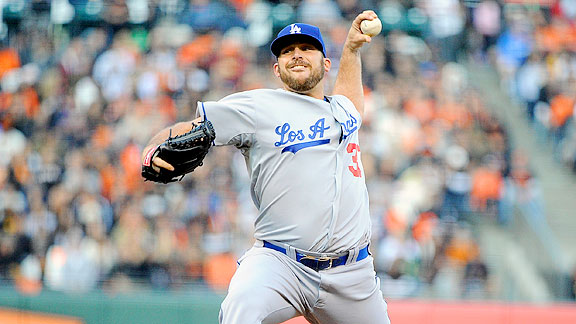 The setup: Eveland, 28, drew a non-roster invite from the Dodgers over the winter to Spring Training. After pitching 168 innings for Oakland in 2008 with a 4.34 ERA, Eveland staggered through the next two seasons with a combined 6.96 ERA in 98 1/3 innings for the A’s, Toronto and Pittsburgh, allowing 204 baserunners while striking out 46. Eveland than had the honors of incurring the Dodgers’ first Spring Training injury of 2011, a bum hamstring that eliminated whatever chance he had of making the Opening Day roster.

The closeup: Eveland ended up being Albuquerque’s top pitcher in 2011 with a 4.38 ERA in 154 innings, averaging more than six innings per start in the tough hitting environment to become a Pacific Coast League All-Star. Still, it wasn’t until September came and the Dodgers were winding down the season of youngster Nathan Eovaldi that Eveland returned to the bigs. He dominated his first start, holding the Pirates to one run over eight innings and 99 pitches, an achievement by a first-time Dodger matched by only four others in the past four decades. In start No. 2, he shut out San Francisco over seven innings to lift the Dodgers to a .500 record in 2011 for the first time in ages.

His next two outings went not nearly as well (nine innings, nine runs combined), but he finished on an upbeat note with 5 2/3 shutout frames at Arizona, ending his season with a 3.03 ERA. He allowed 36 baserunners in 29 2/3 innings but struck out only 16.

Coming attractions: Eveland is in that position of renting a spot in the Dodger rotation in November but being a long way from owning it in April. As an inconsistent pitcher who doesn’t strike many out, Eveland would still have to prove he’s more than a spot starter.

Dead cat bounce: Dodgers at .500 after another victory over Giants

In a year that has been so impossible, the improbable has happened.

The 2011 Dodgers, which threatened for most of the year to be the worst Dodger team since 1992 and one of the worst in the franchise’s Los Angeles history, have fought their way back to a .500 record, capping the comeback by defeating the Giants tonight, 3-0.

It’s a pretty incredible turnaround, and it shows just how big a hole they dug that except for maybe the Angels, they’re the only one of those teams above that won’t be going to the playoffs – in fact, they won’t even be close. They will possibly finish as high as second place, having pulled within 2 1/2 games of San Francisco (75-70) – but they’re only a half-game closer to first place than they were July 7, thanks to the similarly ridiculous run of Arizona.

The Dodgers won tonight with their “trips right” offense – James Loney and Matt Kemp scoring the first two runs after each hit triples to right off Ryan Vogelsong and his sub-3.00 ERA in the second and fourth innings – and with the remarkable pitching of Dana Eveland.

Eveland might be doing it with mirrors, but they’re efficient mirrors. He has struck out only six batters in 15 innings over two starts with the Dodgers, but he’s been practically untouchable.

Tonight, he shut out San Francisco over seven innings, allowing two singles, a double and a walk before the eighth inning, when he walked the leadoff batter and was replaced by Kenley Jansen. Jansen gave up a single but retired the next three batters (all of them tying runs) to keep the shutout alive, and Javy Guerra put the Giants out in the ninth (after allowing two baserunners) to close it.

Two big plays helped the Dodger pitchers: a leaping catch by Justin Sellers, in his first MLB start at third base, of a Brandon Belt liner after two of the Giants’ hits of Eveland had put runners on second and third, and a running catch at the wall in center with one out and one on in the ninth by MVP candidate Kemp, with Belt again the victim.

Juan Rivera went 3 for 4 and drove in a run, while Loney had two hits and a walk.

Joe Block of KABC AM 790 tweeted that Eveland had never before pitched consecutive games totaling 15 innings and 193 pitches. Has the 27-year-old, who was injured in Spring Training and spent all season in the minors before September 1, resurrected his career and become a contender for the 2012 roster? It’s interesting to read what I wrote about him seven months ago in the 2011 Dodger Thoughts Spring Training Primer.

The 28-year-old (oops – not until October) has slung a 6.96 ERA the past two seasons with 204 baserunners allowed in 98 1/3 innings against 46 strikeouts. Last year, he sucked Toronto in by allowing four earned runs in his first three starts, only to finish the year back in the high sixes. In short, like many professionals, he’s capable of a solid outing every now and then, but it’s a roulette wheel you don’t want to spin.

It sounds harsh, even wrong, to be dismissive of Eveland. You should keep your guard up long-term, but feel free to celebrate him – and the turnaround Dodgers – tonight.

From the Dodger press notes: “According to Elias, over the last 39 years, only four other Dodgers pitchers (besides Dana Eveland) have pitched at least 8.0 innings while allowing one-or-fewer runs in their first career start with the team: Fernando Valenzuela (April 9, 1981), Dave Stewart (May 19, 1982), Pedro Astacio (July 3, 1992) and Brad Penny (August 3, 2004).”

Also, Stats LLC says Matt Kemp has become the first major-leaguer since 2004 to have at least 30 homers, 30 steals and 10 outfield assists.

Pitching with the authority normally reserved for colonels and Kershaws, first-time 2011 Dodger starter Dana Eveland needed only 99 pitches to cruise through eight innings of one-run ball in the Dodgers’ 6-4 victory over Pittsburgh today.

The 27-year-old Eveland, the ace of the ’11 Albuquerque Isotopes with a 4.38 ERA and 107 strikeouts in 154 innings, allowed six hits while walking none and striking out three. After allowing a run-scoring double-play grounder in the second inning to cut the Dodgers’ lead to 3-1, Eveland set down 18 of the final 21 batters he faced.

Eveland had a 5.74 major-league ERA in 330 2/3 innings with 6.0 strikeouts per nine innings entering the game.

The Dodgers got off to a 3-0 first-inning lead thanks to a leadoff glad-to-be-back single by Dee Gordon (2 for 5), a single by Matt Kemp (followed by his 36th steal), an intentional walk to Andre Ethier, a two-run single by Aaron Miles and a sacrifice fly by Tony Gwynn Jr.

In the seventh, singles by James Loney (2 for 5) and Kemp (the same) an error and a passed ball provided the Dodgers’ fourth run, and Gordon had a two-run double in the eighth. A.J. Ellis, who scored one of the runs in the eighth, was 2 for 3 with a walk.

Los Angeles teased a nightmare in the ninth. Blake Hawksworth started the inning by serving up a single and a two-run Alex Presley homer. Kenley Jansen relieved and allowed his first hit and run since the Middle Ages, but then struck out Josh Harrison and Brandon Wood to end the game. 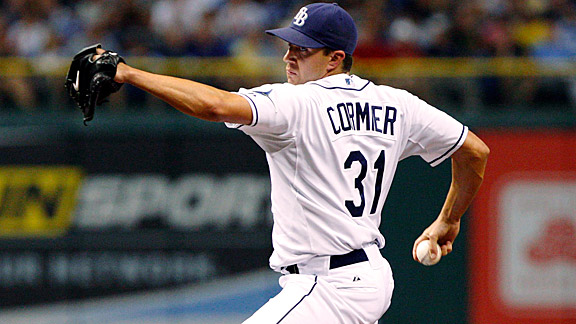 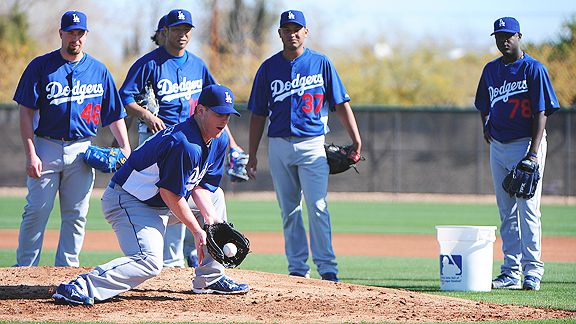 No salary arbitration for Barajas, Padilla and Podsednik

In declining to offer salary arbitration to free agents Rod Barajas, Vicente Padilla and Scott Podsednik, the Dodgers chose the flexibility of being able to offer each contracts on the teams’ terms in exchange for the rights to compensation of a draft pick after the first round should the players sign elsewhere. (Here’s a list of those elsewhere who got salary arbitration offers, from MLB Trade Rumors. Octavio Dotel?)

But on this day, I just wish to celebrate once again the fact that baseball has eliminated its nonsensical rule that prevented teams from negotiating with their own free agents if they declined arbitration – a rule that gave the 29 other teams a distinct advantage over the player’s most recent team. Having nothing to do with these three players, I’m just glad a stupid rule is no more.

As True Blue L.A. reminds us, December 2 is the deadline for the Dodgers to offer arbitration to non-free agents: Russell Martin et al.

Meanwhile, in the Noah’s Ark that bears non-roster invitees to Spring Training two-by-two, the Dodgers now have a pair of sub-mediocre ex-Diamondbacks, Dana Eveland and Oscar Villarreal.