Why John Ely will have trouble becoming Rookie of the Year 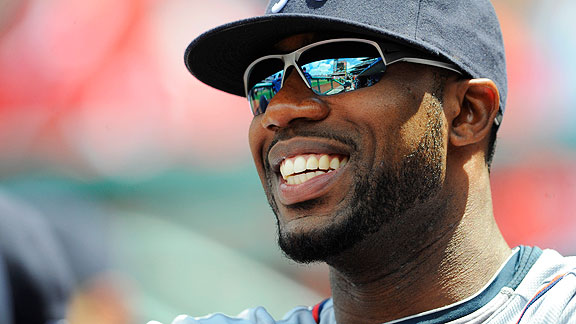 A Rookie of the Year campaign for John Ely becomes less far-fetched by the day — heck, the guy has practically been Cy Young (if not Ubaldo Jimenez) in every appearance since his first, with a 1.80 ERA. But then there is the matter of one Jason Heyward.

Heyward, who doesn’t turn 21 until August, has a .410 on-base percentage, .567 slugging percentage and 160 adjusted OPS for Atlanta this year. For fans of Wins Above Replacement, Heyward is sixth in the National League. In other words, he’s been spectacular, and spectacular since Day 1 of 2010.

Entering play Tuesday, Jason Heyward had played 47 games. Just for comparison’s sake, here is what Alex Rodriguez did in his first 47 games (also at age 20).

At least Ely has a bouncy leg up on Aroldis Chapman, though Chapman provided intriguing viewing for Craig Calcaterra of Hardball Talk.