Starting today, I’m making periodic contributions to the CityThink blog at Los Angeles Magazine. My first piece looks at the state of the Dodgers from a War Games perspective. Check it out …

Good teams have bad weeks, and one bad week like the Dodgers are having (with four losses in a row, including Friday’s 8-5 come-from-ahead defeat against the Angels) doesn’t ruin a season. At the same time, people have feared all along that the Dodgers are a team living on the brink of destruction in a dangerous baseball world.

In the spirit of War Games, here’s a snapshot of which Dodger problems are tic-tac-toe and which are global thermonuclear war …

Read the rest at CityThink … 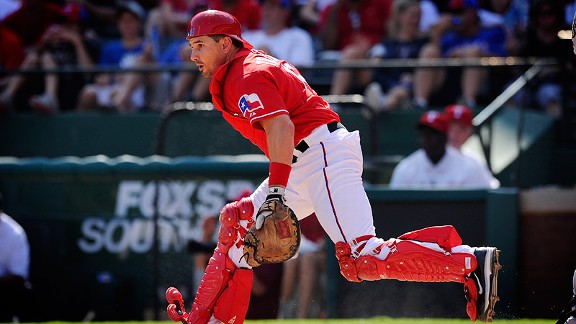 My favorite thing about the Dodgers signing catcher Matt Treanor, who will be paid $850,000 this season, is that he is clearly designed to be a backup, meaning that A.J. Ellis will finally get a chance to see what he can do with his on-base skills as a No. 1 (or No. 1.5) catcher.

My second-favorite thing is that Treanor himself walked 34 times in 242 plate appearances in 2011, though I’m not entirely sure how or why.

My third-favorite thing is that having lived through a litany of Dodger backup catchers, I don’t intend to spend a lot of time thinking about how valuable Treanor is. And I suggest you don’t either. Just know that he is joining the most hallowed list of hallowed lists: Dodger Catchers of the 2000s.