END_OF_DOCUMENT_TOKEN_TO_BE_REPLACED

Sunday slice: At the Tokyo Dome Kaz Ishii and Takashi Saito were on hand at today’s game. (Ben Platt/MLB.com)

Enjoy this selection of images from Sunday in Japan. END_OF_DOCUMENT_TOKEN_TO_BE_REPLACED

The Dodgers haven’t ruled out Casey Blake starting the season on the disabled list after all, reports Tony Jackson of ESPNLosAngeles.com.

After two 7-1 victories to start the week, the past few days have had a little something for everyone … meltdowns by the defense, the offense, Jonathan Broxton and Chad Billingsley. Health concerns. Mental mistakes. A feeding frenzy for the pessimistic (or realistic, if you wish).

I believe we call these teaching opportunities for the boys in blue.

Concerns from Saito and Kuroda

Former Dodger reliever Takashi Saito has left Spring Training with the Milwaukee Brewers in an effort to try to reach his parents, whom he has not been able to contact since the Japan quake struck, writes Adam McCalvy of MLB.com.

Tony Jackson of ESPNLosAngeles.com also reports that Dodger pitcher Hiroki Kuroda has not reached his brother but believes him to be okay, but that Kuroda is concerned about such friends and former teammates as Kazuo Matsui and Akinori Iwamura.

At Inside the Dodgers, Josh Rawitch passes along his own concerns and best wishes.

Vince Lombardi on what winning really is

From the excellent HBO sports documentary “Lombardi”, here’s Vince Lombardi’s most famous quote in his own words — and his misgivings about it:

“Winning isn’t everything, but it’s the only thing. There is no second place. Either you’re first, or you’re last.”

He told me one day, “I wish to hell I’d never said that.” I said, “Well, don’t you believe it?” He said, “What I believe is, if you go out on a football field Sunday, or any other endeavor in life, and you leave every fiber of what you have on that field, when the game finally ends, then you’ve won, and to me that tells a lot more than the final score. And I never made that clear.”

The Dodgers held a mini-press opportunity tonight related to the Ted Lilly signing, and general manager Ned Colletti told Tony Jackson of ESPNLosAngeles.com and other reporters that the Dodger player payroll budget would rise for 2011, though he didn’t say by how much. So the news value here is: It’s not going down.

Dodgers can’t quite bounce back, fall 4-3 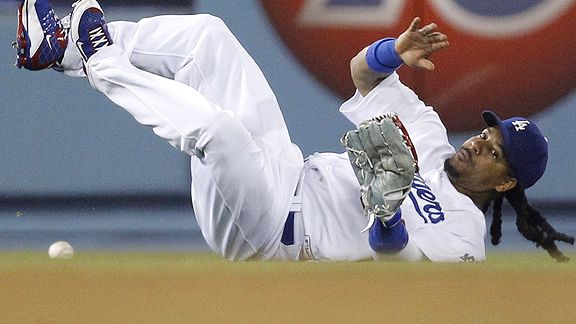 Danny Moloshok/AP
Manny Ramirez’s failure to come up with this sinking drive by Atlanta pitcher Kris Medlen in the sixth inning allowed what proved to be the winning run to score.

Well, the Dodger offense indeed was slumping. Shut out for the first seven innings tonight by Atlanta’s Kris Medlen, the Dodgers had only two runs to show for their past 31 innings. 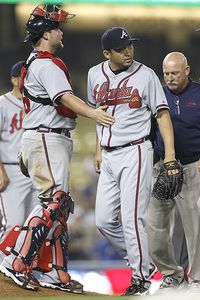 Down 4-0 and held to three runners in the first seven innings by 24-year-old Atlanta righty Kris Medlen, the Dodgers picked and poked their way back into it in the bottom of the eighth, scoring three runs on singles by James Loney, Blake DeWitt, Jamey Carroll and Ronnie Belliard, a throwing error by the Braves (which DeWitt barely converted into a run with a devilish hand-touch of home), and an RBI groundout by Rafael Furcal. But after Matt Kemp walked, mojo-free Andre Ethier struck out on a 2-2 fastball.

And then control of the game turned to our truly old friend, 40-year-old Takashi Saito, pitching against the Dodgers for the first time in his career. In the ninth, Saito retired Manny Ramirez and Loney, then got to 0-2 on Martin … when he had to leave the game with an apparent left hamstring injury. After a delay of several minutes, Jonny Venters came in and threw one pitch to strike out Martin and walk away with Saito’s save of a 4-3 Atlanta victory.

It was a disappointing night for Los Angeles, but not quite the bad taste that a shutout would have left. And the Lakers’ NBA Finals Game 1 victory will certainly provide some cover and consolation.

Hiroki Kuroda is also slumping now, by the way. His performance tonight wasn’t terrible – three earned runs in six innings – but the seven hits and four walks against two strikeouts hint at how sloppy it was. In his past two starts (the previous one an even more uncomfortable outing in Colorado), Kuroda has allowed 11 runs (eight earned) on 23 baserunners in 10 innings with three strikeouts. Yikes.

But this all, I believe, will pass. Perhaps around the time that the Dodger bullpen, which hasn’t allowed an earned run in its past 20 innings (according to the Dodger press notes), cracks.