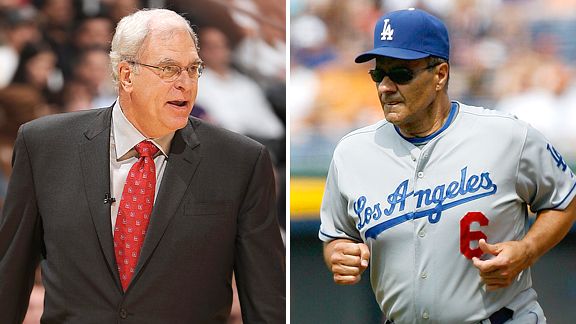 Getty Images
Phil Jackson and Joe Torre have dealt with doubt from outside and within.

What do the 2009 Dodgers and 2009-10 Lakers have in common? Both teams won their divisions and had the top record in their league/conference, but entered the playoffs having lost six of their final nine games.

Last year, there was much anxiety and a fair amount of hopelessness when the Dodgers hit the postseason with such a shaky final stretch. With the Lakers beginning the defense of the NBA title today, I asked current Laker blogger and former Dodger blogger Brian Kamenetzky of ESPNLosAngeles.com and KSPN 710 AM to compare and contrast the two teams.

It’s an interesting question, because looking back the Dodgers certainly didn’t close well. I remember the sense of doom in the air as it looked like they might somehow blow the NL West title to Colorado. Of course, they were already in the playoffs anyway, so it may not have mattered much, other than to give us media types something to talk about (and set up the Dodgers to see Philly a round earlier, costing guys in the locker room a better playoff share).

So what happened to the Lakers is similar, in the sense neither team went/will go into the postseason playing its best base/basketball. (There’s a movie in there somewhere). The difference, though, is expectations. The Lakers spent all season as the, if not prohibitive favorite to win a title, not far off, whereas the Dodgers weren’t perceived as the best Major League Baseball had to offer. A nice team, but World Series caliber?

There was similarity in the angst, but I wonder if the different feel despite similar situations reflects some of the more ingrained attitudes fans have towards the teams. Right now, people expect the Dodgers to come up short. They’re not pulling for it, but because it’s been over 20 years now since the last title, the faithful have less faith. The dark cloud forever hanging over this ownership (before the divorce, even) doesn’t help. Neither did the corporate feel of the Fox years.

The Lakers, meanwhile, are expected to succeed. Recent history gives people the strong belief they’ll be rewarded for their emotional investment. That’s the key difference, as far as I see it.

I also have to think that motivation was more of an issue for the Lakers, since winning a division title is such a non-event for them, relatively speaking. After Cleveland put the league’s best record out of reach – an event that only potentially impacts the Lakers in the seventh game of a seven-game championship series – the final week of their season became as much about getting healthy as anything else.

Certainly, poor regular-season finishes indicate at a minimum that a team is vulnerable, but is there a hangover effect? The Dodgers certainly put that theory to rest when they swept the St. Louis Cardinals in the National League Division Series (keeping in mind that the Cards themselves lost eight of their final 10 regular season games). And when you consider that the Dodgers were one out away from being even with the Phillies after four games in the NL Championship Series, it’s hard for me to see a convincing argument that the late-season losing made a difference – not to mention the fact that an on-fire finish to the regular season could leave a team open to accusations of being over-confident.

As recently as the second round of the 2009 NBA playoffs, when the Houston Rockets won the first, fourth and sixth games of their series with the Lakers, fans and the media were openly questioning the Lakers’ heart and ability to advance. Those doubts became a pretty distant memory within the next month, when the Lakers took out Orlando in five games to win the NBA title.

It really feels to me that the playoffs truly are a new season – and definitely not an easy one. I expect the Lakers to come out fully motivated. That doesn’t mean they might not fall short of repeating as champions, but if they do, it will be because of how well the other team played, not how poorly the Lakers did. As a footnote: Was the Kings’ thrilling overtime victory Saturday over Vancouver in Game 2 of their NHL first-round series a failure on the Canucks’ part, or more a triumph on the Kings’ part?

But I’ll give Kamenetzky the last word:

It started with … needing more motivation, but with about three or four weeks left in the regular season, I really felt the team was trying. It wasn’t an issue of complacency, they just weren’t playing well.

To me, their struggles are a sign of weakness. The alchemy going into playing the way they want to offensively is heavily influenced by continuity, and they’ve had none of it this season, thanks to their injury issues. Moreover, the Lakers have serious deficiencies shooting the ball from the outside, especially once Ron Artest fell off a cliff, accuracy wise. The Threepeat teams at the start of the decade weren’t good three-point shooting teams, either, but they compensated by using Shaq and a younger, more aggressive Kobe to live at the line. This Lakers team doesn’t do either, which historically is a bad recipe for success.

I think they’ll get through the early rounds of the playoffs, in part because most of the teams they’ll face have issues of their own (primarily health), but I don’t think it’s a matter of finally having something to play for. They’re still very good (or potentially very good, at least) and could win a title, but I wouldn’t use my money to lay a bet on it in Vegas.