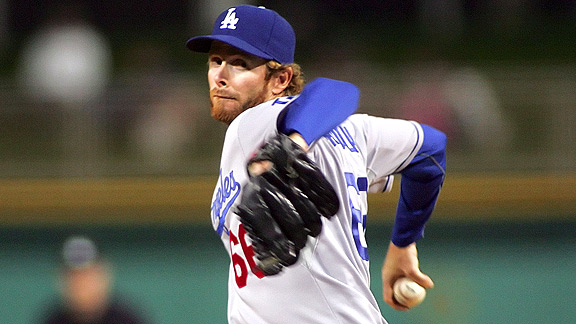 I don’t know, maybe I’m going about this all wrong.

When you can’t even find 10 players you really feel good about ranking out of a group of 35, maybe you need to start ranking something else. For example, if I were ranking TV Cogs and Dogs, I wouldn’t start to worry I was running out of great players after Ron Swanson and Raylan Givens.

I dare say that after rounding out my top 10 with an injured Casey Blake, hit-by-pitch magnet Juan Uribe, a slumping Jamey Carroll and a battle between relievers Blake Hawksworth and Mike MacDougal, I’m ready to go back to reading about all the challenges that Josh Fisher lists for Dodger monitor Tom Schieffer and wondering how Frank McCourt can blame Major League Baseball for the Dodgers’ inability to make 1/12th of his $100 million-or-so payroll at the end of this month. I mean, Luke Walton probably has enough saved to cut the Dodger players their paychecks.

Anyway, as always, Cogs and Dogs mixes subjectivity and objectivity and focuses on what’s already happened, not what’s likely to happen. And afterword, don’t miss Mike Petriello’s interview at Mike Scioscia’s Tragic Illness with Albuquerque Examiner writer Christopher Jackson about the Isotopes, which is overflowing with interesting information.

Mets (and health) stand in between Andre Ethier and Willie Davis