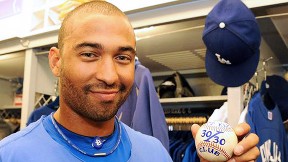 A night not to balk at being a Dodger fan

Dodgers leave it all on the field: Kemp’s 11th-inning homer wins it