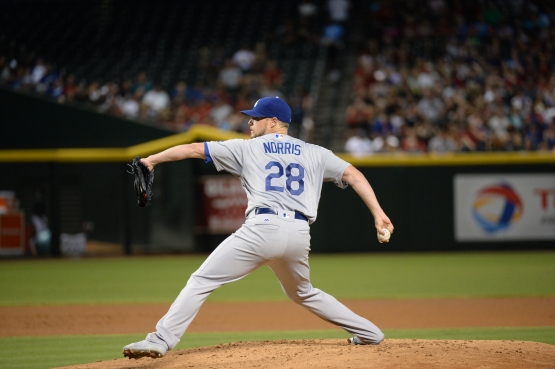 Bud Norris has officially replaced Rich Hill as the starting pitcher for the Dodgers’ second game at Colorado tonight.

Norris, who allowed two runs in five innings in his last start August 26 against the Cubs, will be pitching on four days’ rest. Dave Roberts told reporters he was viewing this series finale as a bullpen game (the last before Thursday’s off day and ensuing roster expansion).

The hope for Hill is that he slots in this weekend when the Dodgers host San Diego. Julio Urías is currently scheduled to take the mound Friday, but the next two starters haven’t been announced.

On the bright side for the Dodgers, they will be facing Colorado right-hander Jeff Hoffman (who has allowed nine earned runs in 10 innings since making his MLB debut August 20), after struggling again against another southpaw starter.

“Left-handed pitching, it’s no secret has been our Achilles’ heel,” Roberts said. “Situational at-bats have to get better. Teams going forward are going to run left-handers against us, so we’ve got find a way to get runners on base and get ’em in.”

Luis Avilan has been officially recalled by the Dodgers for the second game, in which both teams get to play with 26-man rosters.