Clayton Kershaw: The ‘Enemy’ is our friend 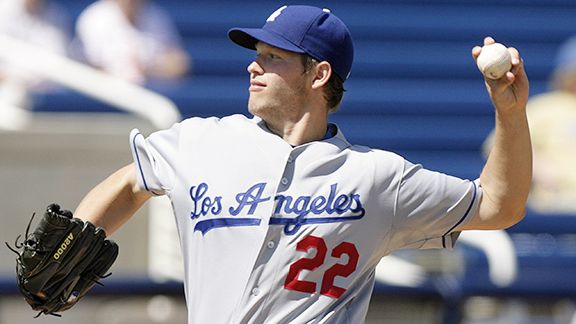 It was only two Marches ago that Clayton Kershaw emerged from the theoretical to the tangible with his “Public Enemy No. 1” to strike out Sean Casey in an otherwise forgettable Spring Training game. Just two years.

Now, Kershaw is a ripe old 22 years old, and most of the debate about him is whether he’ll be great or merely good. And so today, as Kershaw cruises through six innings of his final March outing, striking out seven and walking just one while allowing one run on 99 pitches, Dodger fans don’t need to marvel. They just nod and smile. “Yeah, we know.”

In two blink-of-an-eye years, Spring Training is no longer a proving ground for Kershaw. It’s merely a workout room, a waystation for bigger and hopefully better things.

Update: The latest on Kershaw’s improved repertoire, from Dylan Hernandez of the Times:

Clayton Kershaw couldn’t throw his curveball for strikes in the first couple of innings Sunday, something that would have spelled trouble at an earlier stage of his career.

But his fastball was working. So was his slider. And changeup.

According to a chart kept by pitching coach Rick Honeycutt, Kershaw threw seven of eight changeups for strikes and recorded three outs with the pitch. Seven of his nine sliders were thrown for strikes.

Relying on the two relatively new weapons in his arsenal, Kershaw was able to bide time until his curveball started dropping into strike zone. He exited his final Cactus League start having held the Cincinnati Reds to one run, six hits and one walk over six innings. …

“Blake and Ethier are going to Las Vegas. Ellis and DeWitt will both be there too. We’ll make a statement on second base in a few days. DeWitt couldn’t have done anymore that is within his control, he’s done everything he possibly could have done and come through with high marks.

“Physically guys are ready, mentally it’s tough to remind yourself these games are important. We still have decisions to make not just at second base but the pitching staff as well.

“Haeger could go five or six today, we’re not concerned about building up his endurance. He’s done a good job and handled everything we’ve thrown at him. He can dominate a game when that thing’s working. He talked with Charlie Hough about how to pitch in certain environments. Florida should be fine, he said he enjoys pitching indoors too.

“We’ve got to figure out our starters and figure it out from there. You have Sherrill, Broxton, and Troncoso. Kuo is a question mark, he probably won’t be ready for the season. We’ve got a lot of options.  Sherrill is looking at some video for those who are wondering. They thought he was doing some mechanical stuff that he doesn’t normally do.

“I had a talk with Doug Mientkiewicz yesterday and told him it doesn’t look like he’ll make the team with Anderson around. I told him I’d love to have him around, but he’ll take a day to think about his options. He was understanding of the decision, he likes being here but he wants to be in the big leagues.”

Rain on our parade: Taiwan game washed out, Kuo sidelined

Hong-Chih Kuo won’t pitch in the third game of the Dodgers’ Taiwan series as planned. Right now, the move is being described as precautionary, though it’s certainly worrisome. From Ken Gurnick of MLB.com:Hong-Chih Kuo said he “almost cried” when he told the Dodgers training staff that his elbow was sore again, and the news didn’t do manager Joe Torre any good, either.

Torre had to scratch Kuo from the start of his life Saturday night at 10 p.m. PT, a chance to pitch one inning in front of his mother against an All-Star team from his native Taiwan.

“It’s nothing major — he wants to pitch,” Torre said of Kuo, whose elbow, operated on four times already, has no margin for error. “But if something happened in front of his home crowd … We think it’s normal Spring Training stuff, but can’t take a chance.” …

It was less than a week ago that Torre had his most optimistic statement about Kuo since, perhaps, ever: “It’s nice to have him where you’re not giving him special care. That’s a real good sign for me. He’s maintained a level of health. There’s not a person in the clubhouse … not hoping everything goes well for him.” It did feel a little too good to be true, but hopefully this latest malady is preseason soreness and nothing more.

Despite a lengthy wait, the Dodgers and the All-Stars from Taiwan couldn’t get their second game in.

Doug Mientkiewicz tested his throwing arm successfully Friday by starting a 3-6-3 double play against the Reds, notes Dylan Hernandez of the Times.

Here’s a link to my interview Friday with KSPN AM 710.

In a move one can’t help but interpret, at least in part, as a vote of no confidence in the health of Brian Giles and Doug Mientkiewicz, the Dodgers have signed local hero Garret Anderson to a minor-league deal, the team announced tonight.

Anderson, 38 this June, had a .705 OPS last season (86 OPS+) and was almost equally bad against right-handed pitchers as he was against lefties.  But the team might just be determined to have a veteran at least start the season as the team’s lead lefty pinch-hitter, rather than Xavier Paul, whose bat could certainly match what Anderson did last season.

Perhaps the thinking is also that Anderson might do better with more rest than he has ever had in his career – he has been a regular since 1995.

Previously on Dodger Thoughts: Superman, Then and Now

Considered leading contenders for the Dodger bench because of their previous major-league success, both Brian Giles and Doug Mientkiewicz have arrived at Spring Training with health concerns that aren’t going to go away.

As Ken Gurnick of MLB.com reports:

He went on the disabled list on June 19 and never came off, diagnosed with what was called a bone contusion, which can be a nice way of saying it’s bone rubbing on bone. In that case, all the rehab in the world is meaningless, as the pain will return as soon as he starts running.

“I feel healthy, but you don’t know until you start pounding on it,” he said of his knee, which underwent micro-fracture surgery in 2007. “I’ve always said, if it’s too hard or I can’t play well, I’ll walk away myself. I did regular offseason workouts and they went well.” …

… Giles’ most obvious rival for the bench role is Doug Mientkiewicz, who has physical problems of his own, with chronic pain in his throwing shoulder and, for the second year, must make the club on a Minor League contract. …

Left-handed hitting Xavier Paul would be the most obvious potential beneficiary if Giles and Mientkiewicz can’t make it for the long haul.