Instead of a single Winter Development Program for minor leaguers this month, as they have had in recent years, the Dodgers will run three different smaller camps over the next three weeks.

“There’s room for us to do it a little more creatively this time and optimize for togetherness and development of our players, and also our staff members,” Dodger director of player development Gabe Kapler said.

END_OF_DOCUMENT_TOKEN_TO_BE_REPLACED Dodger director of player development Gabe Kapler spoke to Josh Jackson of MiLB.com about the Dodger minor-leaguers who had the best seasons in 2015. Here are two passages from the interview that stood out:

On Corey Seager’s defense and future at shortstop:

“Sometimes we see a guy consistently make plays that look so easy and so routine that we don’t necessarily see acrobatic plays. What does that mean? He makes plays others make look acrobatic, he makes those plays look effortless. One thing that’s fascinating about Corey: the throws he makes on cutoffs and relays to cut down runners going from first to third look almost identical to the throws he makes with nobody on, when he’s just relaying ball back. That calm. He’s got that thing that allows him to keep his body under control in high-pressure situations.”

On what makes Julio Urias so special:

“He’s about as charismatic and dynamic an individual as we have in the organization. He’s super communicative and incredibly intelligent, very liked, very prepared, very driven. With that. coupled with his athleticism and lower drive and his fastball characteristics, plus the simple grind of being a baseball dude, he has the makings of a really special contributor to our organization. He’s a guy who’s going to be good for a long time.”

In case you missed it: Blowin’ in the wind

How many steps must a man run down
Before he realizes he’s not going to catch that home run by Howie Kendrick?

The answer, my friend, is 11. That’s about how many footprints Rangers center fielder Leonys Martin made before he watched forlornly as Kendrick’s homer sailed about a first down or two beyond the outfield fence.

Here is some postgame reaction, from Pedro Moura of the Register:

It was 11 a.m. Tuesday, two hours before the Dodgers were to play the Texas Rangers here, 20 minutes away from their spring-training home, and Howie Kendrick and Jimmy Rollins had made plans to carpool.

Kendrick was dressed and ready to go; Rollins was still in his workout gear, needing to shower. They chided each other in the clubhouse, Rollins telling Kendrick to slow down, Kendrick telling Rollins to speed up. That’s the relationship the two men have developed in three weeks as teammates after almost a decade of mutual, cross-league admiration.

So, after Kendrick smashed perhaps the longest homer of his pro career Tuesday, at least 440 feet to dead center off Rangers left-hander Joe Beimel, no one in the Dodgers clubhouse was better suited than Rollins to provide perspective.

“Actually, I kind of thought I missed it a little bit,” Kendrick tried to say. “I guess the wind was blowing today.”

Rollins interjected: “In other words, I’ve never hit one that well.” …

Click here to read the entire article. And now, here are some more morning links …

[mlbvideo id=”37156181″ width=”550″ height=”308″ /]
In this video, hear Gabe Kapler talk more about the Dodgers’ developmental focus to MLB Network’s Matt Vasgersian and Harold Reynolds (with this Dodger Insider article as a launching point) and then detail the difference between my hometown of Woodland Hills and his hometown of Reseda.

Ken Gurnick also has a piece on the process at MLB.com.

An energizing moment for the Dodgers

What’s happening at Dodger Stadium this week is bigger and more exciting than you realize.

END_OF_DOCUMENT_TOKEN_TO_BE_REPLACED

New Dodger director of player development Gabe Kapler said that the focus of this year’s Winter Development Program for select Dodger prospects will be more on the mind than the body.

END_OF_DOCUMENT_TOKEN_TO_BE_REPLACED

About the new front office …

In the days since the Dodgers announced new additions atop their front office, some noteworthy profiles have emerged, offering a window into their souls.

Yeah, that’s right — I said it. Their souls.

END_OF_DOCUMENT_TOKEN_TO_BE_REPLACED

The past 24 hours in the Dodger front office should be sponsored by Hires Root Beer.

The third and fourth people to officially join the executive staff since Thursday evening are Gabe Kapler as director of player development and Billy Gasparino as director of amateur scouting. Ken Gurnick of MLB.com has more on the newbie newbies.

END_OF_DOCUMENT_TOKEN_TO_BE_REPLACED 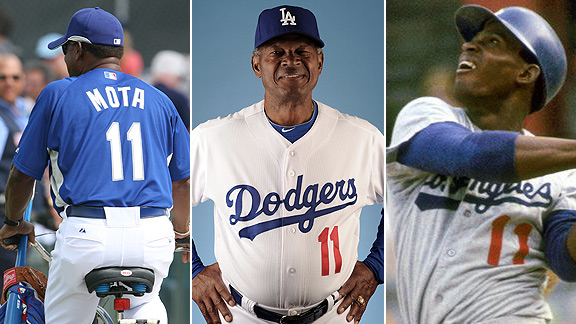 … In each case, the gap seemed small enough that the sides would appear likely to reach an agreement well in advance of going to an arbitration hearing in February.

If either player goes to a hearing, after hearing each side state its case, a three-person arbitration panel would be forced to choose one of those two figures, with no wiggle room in between. Until such a hearing, though, the two sides are free to reach an agreement at any figure, and the sides often settle at the midpoint.

Only two players — pitchers Eric Gagne in 2004 and Joe Beimel in 2007 — have taken the Dodgers all the way to an arbitration hearing in the 10 years that assistant general manager Kim Ng has been handling cases for the club. Both of those players lost their cases. …

Gabe Kapler, who returned in 2008 from a year-long retirement to a major-league playing career, has signed a minor-league contract with the Dodgers.

Last season, the 35-year-old outfielder had a .288 on-base percentage and .290 slugging percentage in 140 plate appearances with Tampa Bay.

After retiring following the 2006 season, Kapler managed the Greenville Drive of the Single-A South Atlantic League to a 58-81 record. He then returned to the playing field in 2008 with the Milwaukee Brewers, for whom he had one of his best seasons: an .838 OPS in 245 plate appearances.

The Dodgers have already made several signings this winter to try to fill out their outfield alongside Andre Ethier and Matt Kemp, agreeing to terms with Marcus Thames, Jay Gibbons and Tony Gwynn Jr. In-house options Xavier Paul and Jamie Hoffmann, among others, also return.

Detroit selected Kapler, a graduate of Taft HS in Woodland Hills, in the 57th round of the 1995 amateur draft out of Moorpark College.