END_OF_DOCUMENT_TOKEN_TO_BE_REPLACED

Dodger bench coach Bob Geren rides his bike from Pasadena to Dodger Stadium (and then in Dodger Stadium) before almost every home game. SportsNet LA has a fun time telling the story in the video above.

It’s also a good reminder that, if you can handle the final uphill climb, cycling is one of the alternate means of transportation to the ballpark. That’s what the ledger shows for five seasons. Please, sir. I want some more.

But Cilladi is no unfortunate, and he would rebel at the very thought of it. He is a man of means, ambition and perspective — Dodger bullpen catcher today, who knows what tomorrow?

“To me, negativity is an absolute distraction,” Cilladi said. “The time that’s used to complain or mope or whatever else, can be time better utilized for the person next to you or for you, and I really take that to heart. Why am I going to complain? If I have a negative thought in my head, I’m going to turn that into something that can either be productive for myself or that’s going to help the person next to me, and I think that’s something we need more of.”

END_OF_DOCUMENT_TOKEN_TO_BE_REPLACED

As a rookie manager who neither pitched nor caught in his big-league career, Dave Roberts will be scrutinized for every move he makes with the Dodger pitching staff. (I know — I could have just begun, “As a manager.”)

Today, Roberts spoke about his approach will be, and how he will use pitching coach Rick Honeycutt and bench coach Bob Geren as resources.

END_OF_DOCUMENT_TOKEN_TO_BE_REPLACED

Juan Castro makes a play next to a sliding Alex Cora on July 9, 2009 at Citi Field. (Jim McIsaac/Getty Images)

We’ve got the names of next year’s Dodger coaches, and all but two will be new to their positions in Los Angeles.

Here’s more on everyone joining the staff, from the Dodgers’ public relations department:

END_OF_DOCUMENT_TOKEN_TO_BE_REPLACED

Bear and grin it: The line between too much and too little encouragement

How far should you go to light a fire under someone?

After seeing the Oscar-nominated movie “Whiplash” last winter, with its internal debate between tough love and abuse, I was curious what the reaction would be in the sports world. So earlier this season, I talked to Scott Van Slyke, A.J. Ellis, Kiké Hernandez, J.P. Howell and Darwin Barney about it for the July issue of Dodger Insider magazine. Click each page below to enlarge.

END_OF_DOCUMENT_TOKEN_TO_BE_REPLACED

One-time Dodger outfielder and former Brewers manager Ron Roenicke has joined the Dodgers as their third-base coach, with Lorenzo Bundy remaining in the dugout as outfield coordinator.

It’s a homecoming for Roenicke, who was the Dodgers’ first-round draft pick (17th overall) in 1977. Roenicke played in 212 games for the Dodgers at the outset of a 527-game MLB career. He would later manage in the minors for the Dodgers in the 1990s, including a Texas League title with Double-A San Antonio in 1997.

Bundy is in his second year as a Dodger coach and eighth year in the organization, including three years as manager of Triple-A Albuquerque from 2011-13.

Oklahoma City pitching coach Scott Radinsky had a 2.65 ERA in three seasons with the Dodgers.

The Dodgers will return all six of their minor-league field managers in 2014, though two of them will be switching teams.

With promotions throughout the system, many Dodger prospects will work with their coaches from 2014. More on the coaching staffs follows …

END_OF_DOCUMENT_TOKEN_TO_BE_REPLACED 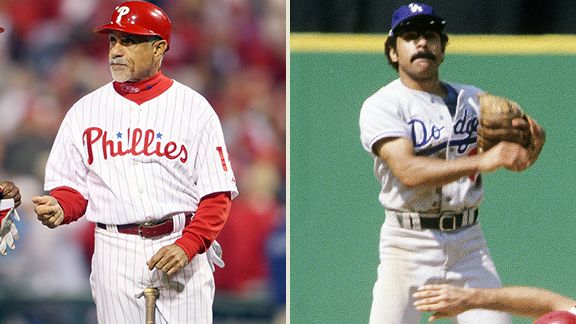 Getty ImagesDavey Lopes, now and then …

Intrigue, suspense and a dose of whimsy continue to circle around the 2011 Dodger coaching staff vacancies. Some bullet points from Tony Jackson of ESPNLosAngeles.com.

I mainly want to talk about Lopes, but Moses’ interview with Jackson deserves a look.

“They said it was because [Dodgers prospect] Xavier Paul didn’t improve in the outfield,” said Moses, who also had the responsibility of working with outfielders at the Dodgers’ Triple-A Albuquerque affiliate. “I was shocked, let’s put it that way. A lot of people were. I think the job I did spoke for itself, if you look at the things that happened offensively over the last three years. … But the way I look at it is, it’s their loss.”

I can’t say I see a lot of positives coming out of AAA, particularly in the outfield, for the Dodgers in the past three years. I don’t know the first thing about Moses’ abilities as a coach, whether he deserves praise or parting gifts for his work – I don’t know if he’s responsible – but I don’t know that he’s got a lot to hang his hat on.

As for Lopes, I like the idea of him coaching for the Dodgers, not just because of the homecoming, but because of the potential of improving the Dodger running game. As True Blue L.A., Phillies Nation and Baseball Musings have noted, the Phillies have been great on the bases under Lopes’ watch, and it’s probably not all a coincidence. This could be one of those seemingly rare cases where a player has been able to translate his on-field skills into coaching: Lopes had a career stolen base percentage of .830, seventh all-time, with Jimmy Rollins of the Phillies passing him this season.

But clearly, Lopes is looking for a nice payday – which of course the Dodgers might not be inclined to offer – and in addition, Jackson writes that “the Dodgers already had a list of candidates they were considering for the role, a source said, so it might be too late in the process for Lopes as far as the Dodgers are concerned.”

Lopes, who went 144-195 managing the Brewers from 2000-2002, has also coached for the Padres and Nationals. He is a prostate cancer survivor. Another former Dodger, Ron Roenicke, is poised to become the Brewers’ next manager.