Joe Davis offers touching thanks and farewell to Vin Scully 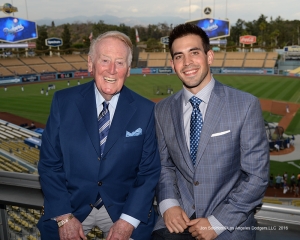 After Thursday’s game, Dodger play-by-play announcer Joe Davis bid farewell to Dodger fans for 2016, in words that were equal parts gratitude for his first season and a tribute to Vin Scully that hit just the right note.

Vin, of course, will handle TV chores for the final weekend of his 67-season career, with the broadcasts from San Francisco tonight through Sunday simulcast on SportsNet LA, KTLA and AM 570 LA Sports. All playoff games thereafter will be national telecasts, with the National League Division Series beginning on either Fox Sports 1 or MLB Network. 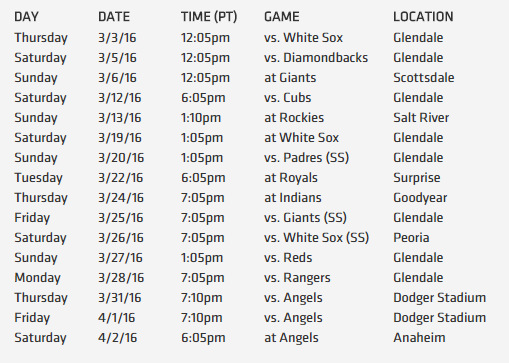 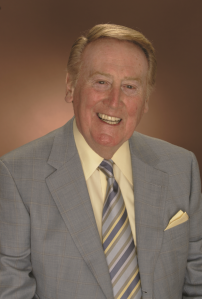 Vin Scully is scheduled to call four of the 16 Dodger games SportsNet LA will televise during Spring Training, including all three Freeway Series tilts against the Angels.

The SportsNet LA schedule (shown up top) begins with the Cactus League opener March 3 against the White Sox. All four National League West rivals are featured, including two games against the Giants on March 6 and 25. SportsNet LA will air games on every Saturday and Sunday in March.

Live coverage from Camelback Ranch begins tonight at 7 p.m. with the Spring Training debut of “Access SportsNet: Dodgers,” which will air every weeknight until the regular season, with John Hartung, Alanna Rizzo, Hershiser, Garciaparra, Jerry Hairston Jr. and Ned Colletti on board.

SportsNet LA, the exclusive 24/7 TV home of the Dodgers, is available on Time Warner Cable, Charter and Bright House Networks. For more information about SportsNet LA or to demand the network from your provider, visit www.sportsnetla.com. You can follow the network on Twitter, Facebook and Instagram. Any time the Dodgers add a new play-by-play announcer to their broadcast team, it’s going to draw attention — especially in the winter before what Vin Scully has said will be his final year behind the mic.

So let’s just make it clear: Joe Davis, who will be the play-by play announcer for 50 Dodger road games in 2016, working with Orel Hershiser, Nomar Garciaparra and Alanna Rizzo, is not taking Scully’s place.

“I think that like all Dodgers fans, I would hope that Vin would go as long as Vin would want to go,” Davis said in a phone interview. “From my perspective, I’m just looking at 2016. I know it sounds cliché to say that, but I’m just looking at my job to do those 50 games in 2016. Nobody replaces Vin Scully — nobody ever will replace Vin Scully. So all I really can worry about is doing my job the best I can, getting to work with an incredible crew and two guys that I think are two of the best analysts in all of baseball.”

With that out of the way, who is Joe Davis?