With a latenight freelance assignment to work on and a link to an online feed from Taiwan, I was primed to watch my first full Dodger game of the year. And would that they could all be this much fun in 2010 …

The 22-year-old Trayvon Robinson scored three runs, the third on a towering ninth-inning homer to dead center field. Xavier Paul and Michael Restovich had two hits, and Lucas May and Angel Berroa each had booming doubles.

Jamey Carroll went 0 for 5, but more relevantly played error-free ball at shortstop and was the middleman on a 3-6-3 double play with Loney.

Josh Towers allowed one run over three innings, and was followed by Josh Lindblom, whose three shutout innings were highlighted by the best Spring Training curveball for strike three I’ve seen since Clayton Kershaw’s Public Enemy No. 1.

We also got a glimpse of converted catcher Kenley Jansen on the mound; Jansen struck out one in a perfect eighth inning. Jon Link gave up two hits but closed out the game in the ninth, striking out two.

Update (from The Associated Press): “Four players were sent down after the game in the Dodgers’ first cuts of the spring. Non-roster players Brian Barton, Francisco Felix and Gabriel Gutierrez were reassigned to minor league camp. Pitcher Kenley Jansen was optioned from the major league roster.”

The happiest team on Earth 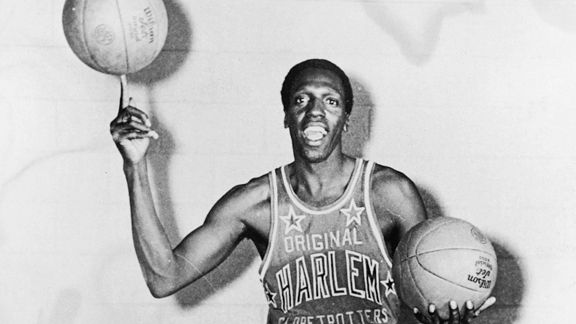 So in the comments this afternoon, I started thinking about what it would be like if the Dodgers made this roadshow they’re currently on in Taiwan a permanent thing. I don’t mean an overseas trip every year. I mean turning the Dodgers into a modern-day baseball version of the Harlem Globetrotters – the L.A. Dodgers Traveling All-Stars and Motor Kings –  crossing the globe on a 200-game roadtrip.

Oh sure, the team would never win a World Series again – but on the other hand, they’d really be playing a World Series. Tommy Lasorda managing, Don Rickles as his bench coach, Manny Ramirez signed to a 10-year entertainment services contract that lasts until he’s 48, Rickey Henderson brought in as designated runner and team emcee, Clayton Kershaw mixing fastballs with snowballs, Matt Kemp as the next Meadowlark Lemon, James Loney as Curly Neal, Jackie Robinson and Sandy Koufax each taking an inning via hologram, and just when you think they might lose, Andre Ethier ending every night with a walkoff homerun that he hits blindfolded.

A squad of baseball clown evangelists – traveling around the world, raising money and goodwill where it’s needed, pocketing it where it’s not, each game better than the last. All the team’s cares whisked away in a confetti-filled barrel of fun, a pregame “Sweet Georgia Brown” and a 200-0 record.

Yeah, I know: What about real competition? To that I say, don’t take me so seriously. Just think about the good times …

Rain on our parade: Taiwan game washed out, Kuo sidelined

Hong-Chih Kuo won’t pitch in the third game of the Dodgers’ Taiwan series as planned. Right now, the move is being described as precautionary, though it’s certainly worrisome. From Ken Gurnick of MLB.com:Hong-Chih Kuo said he “almost cried” when he told the Dodgers training staff that his elbow was sore again, and the news didn’t do manager Joe Torre any good, either.

Torre had to scratch Kuo from the start of his life Saturday night at 10 p.m. PT, a chance to pitch one inning in front of his mother against an All-Star team from his native Taiwan.

“It’s nothing major — he wants to pitch,” Torre said of Kuo, whose elbow, operated on four times already, has no margin for error. “But if something happened in front of his home crowd … We think it’s normal Spring Training stuff, but can’t take a chance.” …

It was less than a week ago that Torre had his most optimistic statement about Kuo since, perhaps, ever: “It’s nice to have him where you’re not giving him special care. That’s a real good sign for me. He’s maintained a level of health. There’s not a person in the clubhouse … not hoping everything goes well for him.” It did feel a little too good to be true, but hopefully this latest malady is preseason soreness and nothing more.

Despite a lengthy wait, the Dodgers and the All-Stars from Taiwan couldn’t get their second game in.

Doug Mientkiewicz tested his throwing arm successfully Friday by starting a 3-6-3 double play against the Reds, notes Dylan Hernandez of the Times.

Here’s a link to my interview Friday with KSPN AM 710.

There are reports of rain, but in case there’s a game and you’re not sleepy …

Dodger third-base coach Larry Bowa was released from the hospital today after a CAT scan examination brought on by abdominal pains. Tom Singer of MLB.com has details.

Update: Ronald Belisario has been found, by Ignacio Serrano of ESPNdeportes.com. In advance of his story, Serrano tweeted that Belisario hopes to have his visa by Monday, that he is in good shape and will only need two bullpen sessions to be game ready, and that he hasn’t missed any appointments with the American embassy in Caracas.

Update 2: Here’s the Serrano column. Link is to the original Spanish version; below is a Google translation.

END_OF_DOCUMENT_TOKEN_TO_BE_REPLACED

Good morning, and welcome to the postgame show!

Yes, the Dodgers’ first game in Taiwan is already over, and it sounds like the Tianmu Baseball Stadium crowd had a good time. Native son Chin-Lung Hu had a two-run single for the Dodgers, but Taiwan’s Chinese Professional Baseball League All-Stars won, 5-2.

Sounds like it’s been a good trip all around, though:

The Dodgers’ mainland Spring Training game takes place against Aroldis Chapman and the Reds at 12:05 p.m., and then the second game of the Taiwan trip begins just after 10 p.m. Pacific time.

Update: Full game wrapup from Gurnick, plus box score. May told Gurnick he was fine.

Update 2: In the comments below, Wen_JK has posted some YouTube links to the game.

Given that the Dodgers left it up to their players to decide whether they wanted to go to Taiwan, if this Focus Taiwan report that Manny Ramirez accepted a $170,000 appearance fee from the promoters of the exhibition series in Taiwan is true, I don’t really see a problem. But I expect others will, just because they find a problem lately with everything Ramirez does. (Link via Dodger Thoughts commenter BHSportsguy).

Ramirez is 38 — which is old for a ballplayer but young for your typical intercontinental flyer, I imagine. He’ll survive.