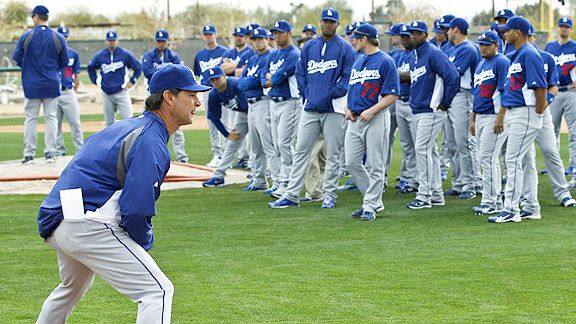 The most fun and interesting detail to come out of Camelback Ranch today was the tidbit that Dodger manager Don Mattingly will stand in the batters box during bullpen sessions for his pitchers. From Tony Jackson of ESPNLosAngeles.com:

In Mattingly’s first spring as the team’s manager, he already has employed at least one unconventional tactic. Often, when a pitcher is throwing in the bullpen, Mattingly will grab a bat, step into the left-handed batter’s box and get into the familiar stance he employed for so many years as a six-time All-Star first baseman for the New York Yankees.

“It gives me a better look at a guy’s stuff,” Mattingly said. “[By standing there], I can tell if what a guy is throwing can get somebody out or it can’t.”

Mattingly conceded that some of his pitchers — especially those who will spend the spring fighting for a roster spot — might be a bit unnerved by firing a baseball in the general direction of the boss’s body. In deference to that, he said he steps out of the box when it comes time for a pitcher to throw to the inside part of the plate.

Ken Gurnick of MLB.com has more.

… Mattingly’s participation in the bullpen sessions had the players talking.

“First time I ever saw that,” said catcher Dioner Navarro. “Caught me off guard. I did a double take. You know, you don’t want to drill him. But you can see he wants to be involved in everything, to know everything. It’s like he’s back to being a player. He knows what it takes. It brings confidence to the team to see that. It’s exciting.”

Mattingly, 49, said he no longer gets the urge to actually hit, having retired after the 1995 season. And he only steps in to his natural left-handed side, because he said he might not know how to get out of the way from the right-hander’s box.

Among the pitchers he “faced” Saturday were veterans Hiroki Kuroda and Vicente Padilla. Mattingly said he’d think twice if he saw a pitcher was having control problems.

“Managers do that in Japan and it’s considered an honor,” said Kuroda. “They do it for top young prospects and established veterans. And in the middle of Spring Training you have a session when you throw 200 to 300 pitches to establish endurance, and the manager steps in then, so you don’t slack off.” … 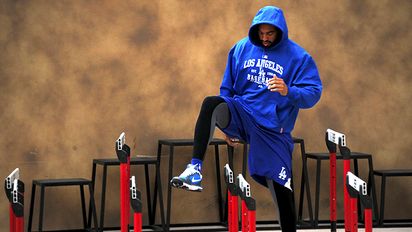 Davey Lopes baserunning tutorials are in full swing. From Jackson:

… Lopes has been giving these tutorials every morning this spring, and after a few minutes on Saturday, (Matt) Kemp was joined by outfielder Tony Gwynn Jr., shortstop Rafael Furcal, highly touted prospects Dee Gordon and Trayvon Robinson and non-roster outfielder Trent Oeltjen. Not one of those players is required to be in camp until Monday, but several of the team’s position players chose to report early.

Lopes’ group spent the entire session taking leads off first, crouching and breaking toward second base, though they weren’t running at anything close to full speed and they stopped about halfway there.

“Right now, I’m just trying to get an idea of what they do and what they attempt to do and see if there is something we can try to adjust to make it a little better fit for them,” Lopes said. “Basically, we’re just breaking down their movements.” …

Hiroki Kuroda is working on adding a curveball to his repertoire. Dylan Hernandez of the Times has more:

Last spring, Kuroda tried to add a changeup to his arsenal, but the project was abandoned early in camp. Kuroda said he’s more optimistic about his curveball.

“I’ll throw it during the exhibition season and see how it feels,” he said.

Kuroda said he has received tips from Clayton Kershaw, but that he learned the curveball grip over the winter by watching videos.

Steve Henson of Yahoo! Sports writes about the importance to Rafael Furcal of the fire truck recently donated to his hometown in the Dominican Republic:

“I’ll sleep better knowing people will be safe,” Furcal said. “I’m the only guy who made it. It’s like a responsibility to me.”

His love of firefighting was noticed by Dodgers public relations director Josh Rawitch, who mentioned it to general manager Ned Colletti during Furcal’s contract negotiations after the 2008 season. Colletti included the truck in discussions with Furcal’s agent, Paul Kinzer. Furcal was torn between signing with the Braves – the team that first signed him in 1996 and for whom he played his first six years in the majors – or returning to the Dodgers.

The fire truck was the ideal perk. It spoke to something close to his heart. And it convinced him the Dodgers cared about him as a person, and about his hometown.

Photo gallery of the night