END_OF_DOCUMENT_TOKEN_TO_BE_REPLACED

In case you missed it: One shining moment (of indeterminate length)

It happens in the blink of an eye, give or take some blinks … Roberto Baly of Vin Scully Is My Homeboy says he has a rare infection that might be connected to his lungs. Keep hoping he’ll get some good news.

Kuroda didn’t allow a hit after Peter Bourjos’ fifth-inning single until an infield single by Bobby Abreu in the ninth on the former Dodger’s 109th pitch, after which Kuroda left the game to a standing ovation. A highlight was a called strike three against Angel slugger Albert Pujols in the sixth.

I’ll always be a fan, Hiroki. Good for you.

Ryan Braun won the appeal of his drug suspension. I’ll let the reaction of Hardball Talk’s Craig Calcaterra stand in for mine.

In almost all cases, the people who say that someone “got off on a technicality” or took advantage of a “loophole” really mean “I think the SOB was guilty and because of that I don’t care if the proper safeguards and protocols were followed!”  It’s a ridiculous stance.

Ridiculous because procedures such as chain of custody and the proper handling of samples — which were not followed in Braun’s case — exist for a reason. That reason is not, contrary to popular grunting, to make it harder for decent prosecutors or authorities to do their jobs. It’s to ensure the integrity of the system. And, in this case, the integrity of the sample. Every detail that is not adhered to presents another opportunity for a sample to be tainted, lost or otherwise compromised. When that happens the test itself is, by definition, unreliable and any reference to what it may or may not have shown is utterly beside the point. …

There’s more in Calcaterra’s post, one I urge you to read in its entirety. Between this chain-of-custody failure and the missing staple that was key to the McCourt divorce case, baseball appears to be ripping off Law and Order plot devices.

I’d like to think this will end the talk that there should be a re-vote of the National League Most Valuable Player award, but perhaps that’s still too optimistic.

Jerry Sands provided a lot of good copy for Dodger beat writers today, as these stories from Eric Stephen of True Blue L.A and Tony Jackson of ESPNLosAngeles.com show.

The bulk of it consisted of fun anecdotes about Sands working as a substitute teacher over the winter, but my favorite part was this, from Stephen:

… Sands got married on November 19, then spent a month in the Dominican Republic, hitting .250/.325/.375 in 20 games with the Tigres de Licey in winter league ball, where he was teammates with 40-year old former Dodgers pitcher and water cooler destroyer Carlos Perez.

Sands said Perez was in something like his 20th year in the Dominican Winter League, and joked that management said of the pitcher, “We keep telling him not to come back, but every year he keeps showing up in the clubhouse.” …

The Dodgers had a few roster moves today.

They claimed 26-year-old outfielder Matt Angle off waivers from Baltimore. Angle had a .599 OPS in 95 plate appearances for the Orioles in 2011 and a .692 OPS in Triple-A, his skills mainly being incredible basestealing ability (38 for 42 at the two levels combined) and defense. Mike Petriello of Mike Scioscia’s Tragic Illness has more on Angle, who is on the 40-man roster but will begin the season in the minors.

Rubby De La Rosa was placed on the 60-day disabled list to make room for Angle.

The 26-year-old allowed five runs on 12 baserunners in 6 1/3 innings for Pittsburgh last year and has a career 5.28 ERA in 46 MLB innings. However, he did strike out 50 in 44 innings for Triple-A Indianapolis in his first significant action since recovering from late-2009 shoulder surgery. So he sounds qualified for an Albuquerque stint. On this Valentine’s Day, Josh Wilker makes Bobby Valentine the subject of his Cardboard Gods offering, linking to a 1971 Spokane Daily Chronicle story in which Valentine declares, “I intend to be the Dodger shortstop for many years.” But Valentine, the 1970 Pacific Coast League MVP, had already suffered the injury that derailed his playing career.

The Bronx prepares for Hiroki Kuroda Expanded playoffs could lower bar for Dodgers in 2012

The deadline is fast approaching, but there are still spots open to play in TheLFP.com Softball Tournament on February 11 at Big League Dreams in West Covina, where readers of Dodger blogs will play with and against each other. Sign up and be part of the fun.

There’s a big difference between making your own decision to go east after months of deliberations, as opposed to being forced to do so at a moment’s notice, against your will.

In November 2010, Kuroda signed a contract in good faith to pitch in Los Angeles in 2011 and made clear his intention of how important it was to him to be in Los Angeles by negotiating a no-trade clause. Now, some would fault him for not volunteering to leave the team he signed with – not to mention his family – behind.

This is a pretty bizarre loyalty test, where you’re required to make a sacrifice for a team that, the minute you make the sacrifice, is no longer your team. I don’t know where the idea that he owed the Dodgers something comes from.

Trading Kuroda for prospects would have helped the Dodgers. So would Kuroda and all his teammates playing for free. It doesn’t mean they’re lesser people for choosing not to do so. It doesn’t mean that Kuroda didn’t have valid reasons for staying.

Those of you who are employed – would you accept a sudden and immediate transfer to a completely different company, across the country, even when you didn’t want to go, only because it would help the company you were previously working for? 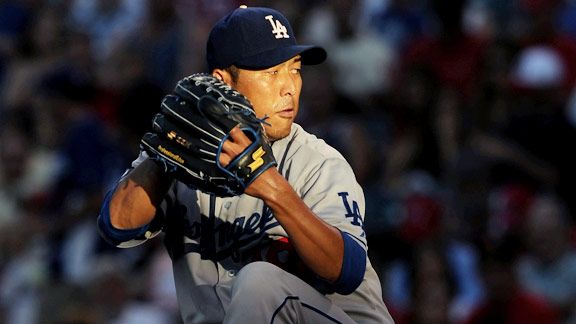 No analysis, just a reluctant farewell to a pitcher of whom I was extremely fond.