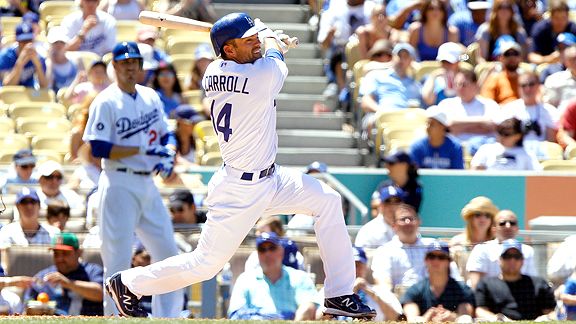 For the past year, people have used the words “gritty” and “gamer” to describe Jamey Carroll so often that it’s become a reflex. They mean it in the best possible way, and I don’t think there’s any doubt that — although other players don’t get enough credit for these qualities — Carroll qualifies.

In any case, I can’t help thinking that the words undersell what Carroll has brought to the Dodgers. “Gritty” risks implying that Carroll’s game is all about the effort and not about the results.

Since coming to the Dodgers in 2010, Carroll has racked up a season’s worth of plate appearances, 562 in all. And over that period, he has had an on-base percentage of .377. That places Carroll 12th all-time in Los Angeles Dodger history for players with at least that many times at the plate. Among those who have played at least 100 games in the infield, he is No. 1.

And this is coming in his late 30s, when more likely than not, he should be declining. That’s just flat-out good.

The point is, I’m not sure that Carroll’s grit is all that unusual. There are hundreds of players in the majors and minors who work every bit as hard as Carroll does — and get varying results, from superstar to never seeing the majors. What’s more unique about Carroll is his talent, a combination of his effort and his ability.

When I think of Carroll and what he has meant to Los Angeles, particularly with the frequent injuries to Rafael Furcal, I’m happy for his effort, but I’m plain thankful for his talent, which has made the Dodgers a better team than they’d otherwise have been. If it weren’t for the talent, people would be all too eager to shake hands with Carroll and show him and his grit the door.