Howie Kendrick an unusual choice for left field, but not the most unusual 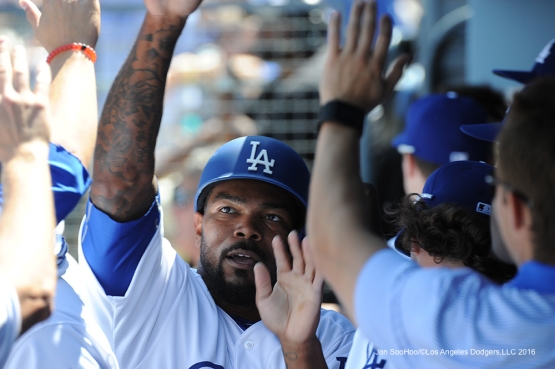 Howie Kendrick, who shifted from second base to left field late in Tuesday’s game, is making his first start in left since August 13, 2011 and 21st overall.

“In a perfect world, we would’ve gotten him more repetitions (in left field) this spring,” Dave Roberts said, according to J.P. Hoornstra of the Daily News. “The way Chase (Utley) is playing, I want to keep him in the lineup.”

Hoornstra added that Roberts believes that left field might be easier than second base physically for Kendrick, who fought off groin and calf issues to make his 2016 debut Tuesday.

Kendrick isn’t by any means the most unusual Dodger left fielder in recent years. Consider these …

As far as actually starting and playing an entire game in left field, perhaps the most unusual choice for the Dodgers in recent memory was Dave Hansen. Hansen was used to playing on the left side of the field, at third base, but on August 31, 2000, at age 31, Hansen made his first and only Major League appearance in left. He made no errors — and went 3 for 4.