In case you missed it: Blowin’ in the wind

How many steps must a man run down
Before he realizes he’s not going to catch that home run by Howie Kendrick?

The answer, my friend, is 11. That’s about how many footprints Rangers center fielder Leonys Martin made before he watched forlornly as Kendrick’s homer sailed about a first down or two beyond the outfield fence.

Here is some postgame reaction, from Pedro Moura of the Register:

It was 11 a.m. Tuesday, two hours before the Dodgers were to play the Texas Rangers here, 20 minutes away from their spring-training home, and Howie Kendrick and Jimmy Rollins had made plans to carpool.

Kendrick was dressed and ready to go; Rollins was still in his workout gear, needing to shower. They chided each other in the clubhouse, Rollins telling Kendrick to slow down, Kendrick telling Rollins to speed up. That’s the relationship the two men have developed in three weeks as teammates after almost a decade of mutual, cross-league admiration.

So, after Kendrick smashed perhaps the longest homer of his pro career Tuesday, at least 440 feet to dead center off Rangers left-hander Joe Beimel, no one in the Dodgers clubhouse was better suited than Rollins to provide perspective.

“Actually, I kind of thought I missed it a little bit,” Kendrick tried to say. “I guess the wind was blowing today.”

Rollins interjected: “In other words, I’ve never hit one that well.” …

Click here to read the entire article. And now, here are some more morning links … Ahead of this year’s All-Star Game, our Cary Osborne put together this great package celebrating great Dodger All-Star memories for this month’s issue of Dodger Insider. Spend a few moments with some of the best of the Boys in Blue. (Click each page to enlarge.) END_OF_DOCUMENT_TOKEN_TO_BE_REPLACED

Yasiel Puig, OF
Fangraphs WAR: 3.3, fourth in NL at his position

Dee Gordon, 2B
Fangraphs WAR: 2.7, first in NL at his position Reflecting the strength of their 2014 seasons and independent of fan bias, Zack Greinke, Clayton Kershaw and Yasiel Puig were unanimous choices for the National League All-Star rosters among five ESPN.com national baseball writers.

Kershaw was recommended as the NL’s starting pitcher by Olney and Schoenfeld, while the other three included him on the NL staff alongside Greinke. Josh Beckett was also an NL All-Star choice by Crasnick and Olney.

Four of the five chose Dee Gordon as a reserve second baseman, with only Crasnick omitting him. In addition, Bowden and Schoenfield had Hanley Ramirez as a backup shortstop.

Meanwhile, Ken Rosenthal of FoxSports.com had Puig, Kershaw and Gordon, but not Greinke, Beckett or Ramirez.

As for the fan voting, it ends tonight at 8:59 p.m., with Puig looking to get a final push to ensure a spot in the NL starting lineup.

With fewer than 60 hours to go until All-Star voting closes at 8:59 p.m. Thursday, Yasiel Puig still has a spot in the National League starting outfield, but he has slipped from first to third among outfielders.

END_OF_DOCUMENT_TOKEN_TO_BE_REPLACED It’s looking like it will go down to the wire in the National League All-Star voting for the starting outfield. Yasiel Puig’s lead has been reduced to 6,654 votes out of nearly 2.5 million, and his margin for a starting spot is only about 338,000, leaving Giancarlo Stanton, among others, to push him aside. Balloting for the All-Star Game ends July 3. Yasiel Puig has widened his lead among outfielders in the latest National League All-Star balloting update.

Puig is now more than 200,000 votes ahead of second-palce Giancarlo Stanton and nearly 300,000 ahead of the next two outfielders, Carlos Gomez and Andrew McCutchen. Only Colorado shortstop Troy Tulowtizki has more NL votes than Puig.

The 23-year-old right fielder was out of the money when the initial tallies came in, but then surged to first place by about 50,000 votes last week.

Fans looking to see Puig start the game shouldn’t become complacent, however, as the voting can shift dramatically week to week.

Meanwhile, Adrian Gonzalez remains in first place among first basemen despite a 1-for-26 start to June, but Paul Goldschmidt is coming on. The Arizona slugger, who a week ago was in fourth place and more than 150,000 votes behind Gonzalez, has eliminated about a third of that deficit.

Dee Gordon, Juan Uribe and Hanley Ramirez all rank the same as last week. Gordon has increased his margin over Brandon Phillips of Cincinnati, but the Pirates’ Neil Walker reduced his gap from 165,000 votes to 121,000.

Two weeks ago, David Wright and Uribe were nearly even in third and fourth place among third basemen. But while Uribe has been sidelined with a hamstring injury, Wright has zoomed to the lead. On the anniversary of his arrival in the Major Leagues, Yasiel Puig has risen from fifth place to first in the latest update of National League All-Star balloting — thanks to more than 500,000 votes in less than a week.

END_OF_DOCUMENT_TOKEN_TO_BE_REPLACED

Adrian Gonzalez leads at first base in All-Star vote

Adrian Gonzalez is in first place among first basemen and Dee Gordon is in second place among second baseman in the initial 2014 National League All-Star vote update.

END_OF_DOCUMENT_TOKEN_TO_BE_REPLACED 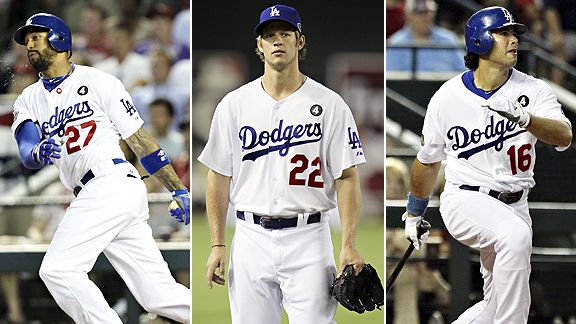 Getty ImagesMatt Kemp walked, singled and scored, Andre Ethier drove in a run with a single and Clayton Kershaw pitched a perfect fifth inning on eight pitches with a strikeout, helping the National League build a 5-1 lead over the American League in the 2011 All-Star Game after seven innings.

Never among the leading outfielders in the fan vote until the very end, Matt Kemp’s outstanding 2011 has been rewarded with a starting spot in the 2011 All-Star Game. Clayton Kershaw has also been named to the National League All-Star roster.

Friday, Hiroki Kuroda took over the Dodger lead in ERA at 2.90, moving ahead of a pitcher most assume will make the National League All-Star team, Clayton Kershaw. In his past six starts, Kuroda has a 1.72 ERA, and opponents are batting .191 against him. So has Kuroda pitched his way into All-Star consideration?

Here’s where Kershaw and Kuroda currently rank in certain categories that might matter to the various selectors for the NL, which is making its All-Star roster announcement Sunday:

As you can see, outside of ERA, Kuroda’s case is very slim. Now, I wouldn’t completely rule out Kuroda sneaking onto a roster at the last minute, the way Hong-Chih Kuo and Rafael Furcal did a year ago, if a need for a substitute player arises. ERA might be the pitching category that has the most importance for All-Star selectors, plus Kuroda seems to be a popular player in baseball and one who might be in his last year pitching Stateside. But, it’s a tough year to pitch your way into the elite.

No doubt, many Dodger fans would be just as happy to see Kuroda get the All-Star break to rest.

Could the 37-46 Dodgers win nine games in a row? Perhaps they’ll find some odd encouragement in the play of their Triple-A affiliate in Albuquerque, where the once 42-30 Isotopes have lost nine in a row.