…Dodgers assistant general manager Kim Ng said Belisario can be kept on the restricted list for up to 30 days after being placed there on Friday, meaning he has to be either activated or waived — he is out of minor league options — by April 25.

Belisario is expected to dress in the major league clubhouse until the team breaks camp on Wednesday, but his activity will take place in minor league camp.

“We have to see what kind of shape he is in,” Ng said. “After determining that, then he will probably be on the other side.”

Other than saying hello to a couple of reporters in the parking lot, Belisario declined to speak with reporters until Sunday morning. …

Colletti was asked minutes before Belisario’s arrival whether the pitcher’s strange behavior might signify a deeper problem.

“It certainly makes you wonder,” he said. “But he is obviously a talent.” …

“Blake and Ethier are going to Las Vegas. Ellis and DeWitt will both be there too. We’ll make a statement on second base in a few days. DeWitt couldn’t have done anymore that is within his control, he’s done everything he possibly could have done and come through with high marks.

“Physically guys are ready, mentally it’s tough to remind yourself these games are important. We still have decisions to make not just at second base but the pitching staff as well.

“Haeger could go five or six today, we’re not concerned about building up his endurance. He’s done a good job and handled everything we’ve thrown at him. He can dominate a game when that thing’s working. He talked with Charlie Hough about how to pitch in certain environments. Florida should be fine, he said he enjoys pitching indoors too.

“We’ve got to figure out our starters and figure it out from there. You have Sherrill, Broxton, and Troncoso. Kuo is a question mark, he probably won’t be ready for the season. We’ve got a lot of options.  Sherrill is looking at some video for those who are wondering. They thought he was doing some mechanical stuff that he doesn’t normally do.

“I had a talk with Doug Mientkiewicz yesterday and told him it doesn’t look like he’ll make the team with Anderson around. I told him I’d love to have him around, but he’ll take a day to think about his options. He was understanding of the decision, he likes being here but he wants to be in the big leagues.” 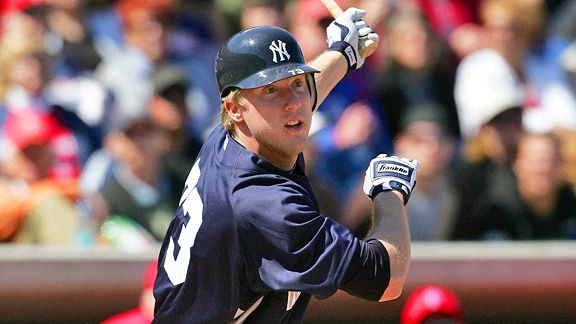 Cliff Welch/Icon SMI
Jamie Hoffmann was 3 for 23 with three walks for the Yankees this spring.

The Dodgers are like the island on “Lost” for Jamie Hoffmann, who can’t seem to stay away no matter how often he leaves or how far he goes.

Designated for assignment last summer only to return, then taken by the Yankees in the Rule 5 draft in the winter, Hoffmann once again is a Dodger, according to multiple news reports, after failing to make the Yankee Opening Day roster and clearing waivers. Hoffmann figures now to start the season in the Dodger minor leagues, competing with Jason Repko for a midseason callup if neither is traded.

In other Dodger news, Russell Martin was hit by a Tim Corcoran pitch at practice this morning. Dodger manager Joe Torre said Martin’s back and wrist were casualties, but there was “no damage.”

Torre continued to show support for Charlie Haeger, among others — to the point where it almost seems a roster spot is being preserved for him.  “I have high regard for him,” Torre said. “We probably wouldn’t pitch him in Colorado, but I don’t think anybody wants to pitch there. Arizona is different since it’s indoors.”

I’m a little surprised by Torre’s affection for Haeger only because of how quickly he was buried last summer after that one bad inning in Cincinnati. Haeger allowed runs in only three of the 20 innings he commenced for the Dodgers last season.

Update: Ken Gurnick of MLB.com clarifies that Martin was hit not by one pitch but by three.  “It got a little too simulated,” Torre said. “There was no damage. He was lucky on the one on the wrist. It was a little too uncomfortable to continue.”