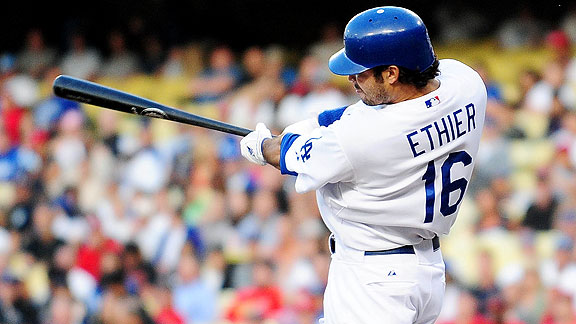 Gary A. Vasquez/US Presswire
Andre Ethier has as many home runs with at least two runners on base in 2010 as the rest of the Dodgers combined.

You know what I look forward to seeing? The Dodgers breaking open a close game or rallying with a three-run home run.

But in 74 games this year, the Dodgers have only eight three-run homers, along with two grand slams by Andre Ethier. That total comes in 443 plate appearances with at least two runners on base.

The Dodgers were on a pretty good pace until shortly before Ethier’s pinkie injury. In nearly seven weeks since May 11, the Dodgers have two three-run home runs.

Manny Ramirez is 16 for 31 (.516) with three doubles and six walks with at least two runners on base, but doesn’t have a homer this year in those situations.

James Loney, who broke the 50 RBI barrier Saturday, is second on the team with two three-run homers. He is 21 for 53 (.396) with four doubles, two homers and four walks with at least two runners on base.

Here are the 10 three- or four-run home runs.

The Dodgers are actually pretty decent at keeping rallies going. But sometimes, you just want to see them hit the heights.