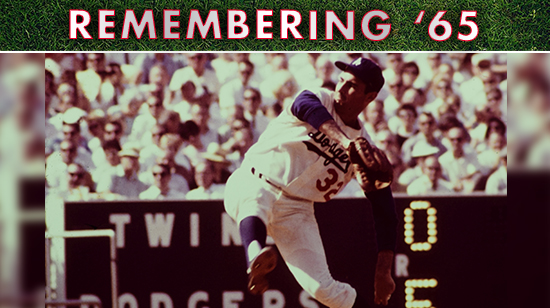 “There are more monkeys in nearby Lincoln Park Zoo than there were cash customers on a grey and gloomy day moistened by occasional drizzlings,” wrote Frank Finch, the ever-present Dodger beat writer for the Times.

“A paid ‘crowd’ of 550 fans rattled around in Wrigley Field. The Dodgers’ share of the gate was $151.25, and traveling secretary Lee Scott said the $2,380.40 check for the series was the smallest he has taken out of a town.”

As if to underscore the desperation of their situation, Walter Alston enlisted Sandy Koufax to come out of relief — for what would turn out to be the final time in his career — to preserve a 2-0 shutout over the Cubs. Claude Osteen pitched the first eight innings, but walked Billy Williams to start the ninth. With Ron Santo coming to the plate as the tying run, Koufax entered.

“The Cub slugger looked as if he had connected for a home run on Koufax’s second pitch, but Lou Johnson surrounded the drive in deep left field,” Finch wrote.

Said Johnson: “The wind caught the ball and almost carried it over my head. It’s a good thing the wall bellies out in that particular spot or I wouldn’t have gotten to the ball.”

Little did anyone know, but that friendly breeze might have been the turning point for the Dodger season.

The Giants won their 14th straight game the same day, but at least the Dodgers didn’t fall any farther back in the standings. And that year, they never would.

The comeback began in earnest the next night in St. Louis. Don Drysdale, who had been knocked out of his last game by a liner off his ankle September 15, returned on one day’s rest and lifted to the Dodgers to a nail-biter over the Cardinals, 3-2. Big D drove in the Dodgers’ first two runs with a bases-loaded single, and Ron Perranoski chipped in with four innings of relief.

San Francisco’s winning streak ended with a 9-1 Juan Marichal loss at Milwaukee — Marichal had thrown three straight complete games in the previous 12 days — and for the first time since September 3, the Dodgers gained a game on the Giants.

Koufax and Osteen — the latter with an inning from Perranoski — finished the St. Louis series with back-to-back shutouts, but those wins merely allowed them to keep pace with San Francisco. (Marichal pitched two shutout innings for a September 19 save.) Then, while the Dodgers were idle September 20, the Giants won again — their third straight victory and 17th in 18 games — to bump their NL lead back up to a solid four games with 12 remaining.

Still, the Dodgers kept at it. On September 21, Drysdale pitched a complete game and drove in the first run of a 3-1 victory at Milwaukee, while San Francisco lost to Cincinnati.

On September 22 came a remarkable comeback, once again from the practical and emotional brink. Koufax allowed a grand slam to Frank Bolling and was knocked out after two innings. After an inside-the-park homer by Gene Oliver off reliever Howie Reed, the Dodgers were down, 6-1.

But Los Angeles scored two in the fourth, three in the fifth and one in the 11th (an RBI single by Johnson) to regain the lead, and won the game when center fielder Willie Davis snagged a liner by Hank Aaron and threw to Wes Parker to double Mack Jones off first base.

Marichal was pounded again, this time by the Reds, and suddenly the NL West lead was down to two games.

“We’re gonna win it all, I kin jus’ smell it,” said Jim Brewer, the homespun sage of Broken Arrow, Okla., as the jubilant Dodgers piled into their bus.

Jim’s prediction was met with enthusiastic applause by his teammates, but after the first blush of that astonishing victory fades, the mathematical facts of the pennant race must have a sobering effect.

San Francisco was 90-62, Los Angeles was 88-64. After a final day off for both teams, the Dodgers and Giants each had 10-game homestands to finish the season.