As Rubby returns, a look back at the big 2012 trade Tonight, Rubby De La Rosa faces the Dodgers for the first time, outside of batting practice or bullpen sessions before he was traded away in 2012.

Once a bigtime prospect for the Dodgers, De La Rosa technically left on October 4, 2012 with Jerry Sands as players to be named later in the August 25 deal that brought Josh Beckett, Carl Crawford, Adrian Gonzalez and Nick Punto from Boston to Los Angeles. James Loney, Ivan DeJesus Jr. and Allen Webster had already departed Los Angeles that August.

Now 26, De La Rosa has a 4.57 ERA with 105 strikeouts and a 1.45 WHIP in 138 innings since leaving the Dodgers. His ERA is at 4.68 in 25 innings this season, though he does have 25 strikeouts against five walks and was fairly brilliant in his last outing, holding Pittsburgh to one run on four hits and no walks over seven innings while striking out eight.

It cost a bit of money, but so far, the Dodgers have come out ahead in that trade with the Red Sox — no matter what happens in tonight’s game. Here are the Wins Above Replacement totals since the trade for the players, according to Baseball Reference:

These numbers differ a bit on Fangraphs, but the gist is still the same. Webster in particular has struggled, with a 6.25 ERA and 5.9 K/9 in 89 1/3 Major League innings. Now in the Arizona organization with De La Rosa, Webster has a 19.29 ERA with Triple-A Reno through two starts, having allowed 15 runs and 22 baserunners in seven innings before hitting the disabled list.

What’s remarkable is that even if the Dodgers had only received Punto, who had a .335 on-base percentage and .325 slugging percentage in 378 plate appearances from late 2012 through the end of 2013, they still would have arguably won the trade to date. I wouldn’t make that argument necessarily, but still …

With Dodger fans whipped into a frenzy, it somehow seems right that Chad Billingsley is pitching tonight. He’s always good for inspiring a little reaction and over-reaction.

The latest we’re hearing is that in addition to those previously mentioned, Dodger pitching prospect Allen Webster will also be going to Boston. The 22-year-old has 117 strikeouts in 121 1/3 innings this season for Double-A Chattanooga with a 3.55 ERA — including a 2.08 ERA in the season’s second half.

I still haven’t digested Josh Beckett and (currently injured) Carl Crawford coming to Los Angeles. Will get to that later on … Though the Dodger farm system certainly has its less fallow spots, it also certainly has its fertile areas, which were enough for ESPN.com’s Keith Law to rank it 12th in the majors, higher than I’ve seen elsewhere.

For a closer look at some of the Dodger developing prospects, I interviewed Dodger assistant general manager in charge of player development De Jon Watson recently for a piece that is running in full at ESPNLosAngeles.com. Here’s how it begins …

The patchwork roster surrounding established Los Angeles Dodgers stars like Matt Kemp and Clayton Kershaw this year would hint at a dearth of minor league chips to play with, but De Jon Watson would encourage you to ante up.

The Dodgers’ assistant general manager in charge of player development has more than a poker hand’s worth of serious starting pitcher candidates rising through the system, and would even argue for a few wild cards among the position players.

“It’s been good stuff, man,” Watson said of the franchise’s depth at starting pitcher. “Our kids are coming. It’s great to have that type of competition. … If you have a hiccup or someone goes down for a little bit, you have a legitimate option waiting in the wings. The key is being as sharp as they can possibly be when that opportunity arises so you really don’t miss a beat.”

That doesn’t change the Dodgers’ pattern of leaning toward veterans at the start of the season. With Hiroki Kuroda leaving as a free agent and the team’s 2010 minor league pitcher of the year, Rubby De La Rosa, recovering from Tommy John surgery, the Dodgers signed Aaron Harang and Chris Capuano rather than hand a starting rotation slot to Nathan Eovaldi, who had a 3.09 ERA in six starts at age 21 late last summer.

Shortstop Dee Gordon is the only 2011 Dodgers rookie who has the inside track on a starting spot with the team this season. Gordon, who had 24 stolen bases in 56 games and a .325 on-base percentage (.398 in September), will look to capitalize on his hot finish.

END_OF_DOCUMENT_TOKEN_TO_BE_REPLACED Progress toward a sale or posturing?

Not getting too excited about this, but let’s just say I’m hoping it’s one more roll of the boulder downhill …

Good game between Houston and San Francisco this afternoon, one that I was able to watch with the sound down while I worked. Tim Lincecum started for the Giants and allowed a run (without a hit) in the top of the first. Roy Oswalt started for the Astros and surrendered a two-run homer to Juan Uribe in the fourth. And the score remained 2-1 until the ninth, when Brian Wilson relieved Lincecum after a 120-pitch, eight-inning effort. Houston loaded the bases on a walk, a charitable infield single and another walk, and then .378-OPSing Kazuo Matsui extended Wilson into a 15-pitch at-bat. But on his 39th pitch of the ninth, Matsui flied to left and the Giants hung on with their 159-pitch 2-1 victory.

The hottest pitcher and hitter in the Dodger minor leagues are both with Great Lakes, at least for now. Allen Webster, born February 10, 1990, struck out 11 in six innings Friday and now has 38 in 34 1/3 innings this season (against 36 baserunners) along with a 1.57 ERA.  Meanwhile, 22-year-old outfielder Jerry Sands homered again to give him 13 in 35 games, to go with a .459 on-base percentage and .813 slugging.

Vin Scully was interviewed on San Diego radio station AM 1090 Friday, and thanks to Eric Stephen of True Blue L.A. … here’s the recording. The interview’s interesting in that it mainly allows Scully to just talk about the current Dodgers, something he probably prefers to talking about himself.

Update: Looks like Andre Ethier’s the one who got stung. He jammed the pinky finger in his right hand in batting practice. Garret Anderson replaced him in the starting nine, in the relatively primo No. 5 slot. 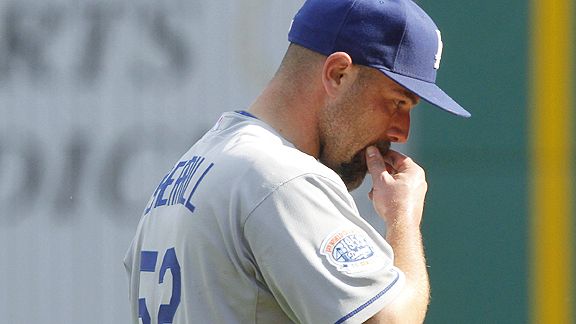