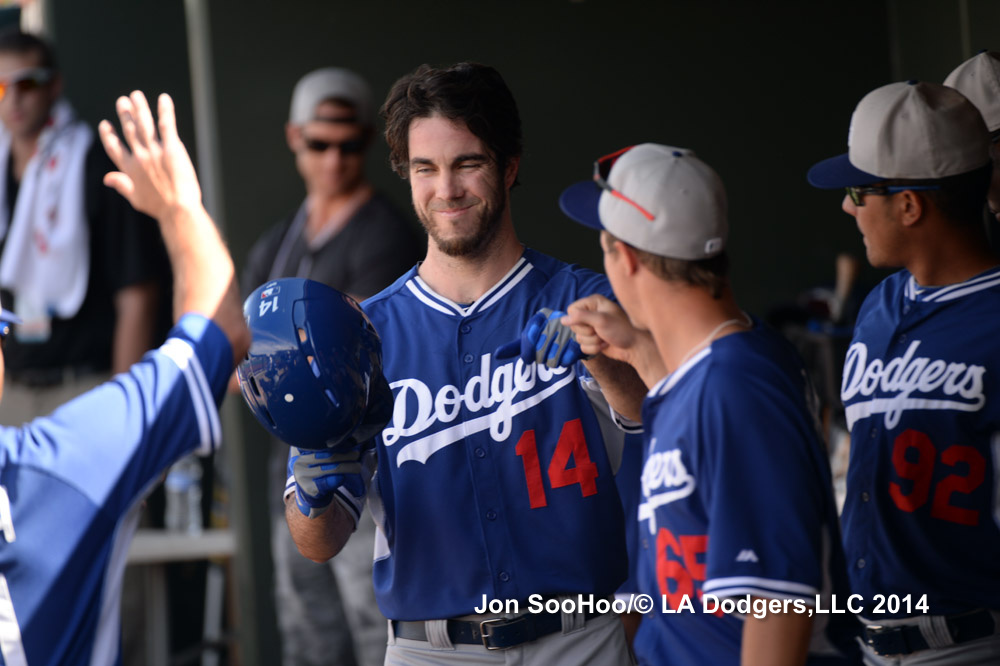 Dan Haren, the one-time Dodger right-hander, has been nothing but fun since his retirement from baseball following the 2015 season. (If you want an extended sample, check out his recent appearance on the Jonah Keri Podcast.)

END_OF_DOCUMENT_TOKEN_TO_BE_REPLACED 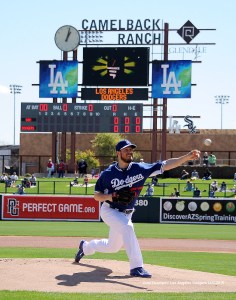 In case you missed it: Kick in the pants edition 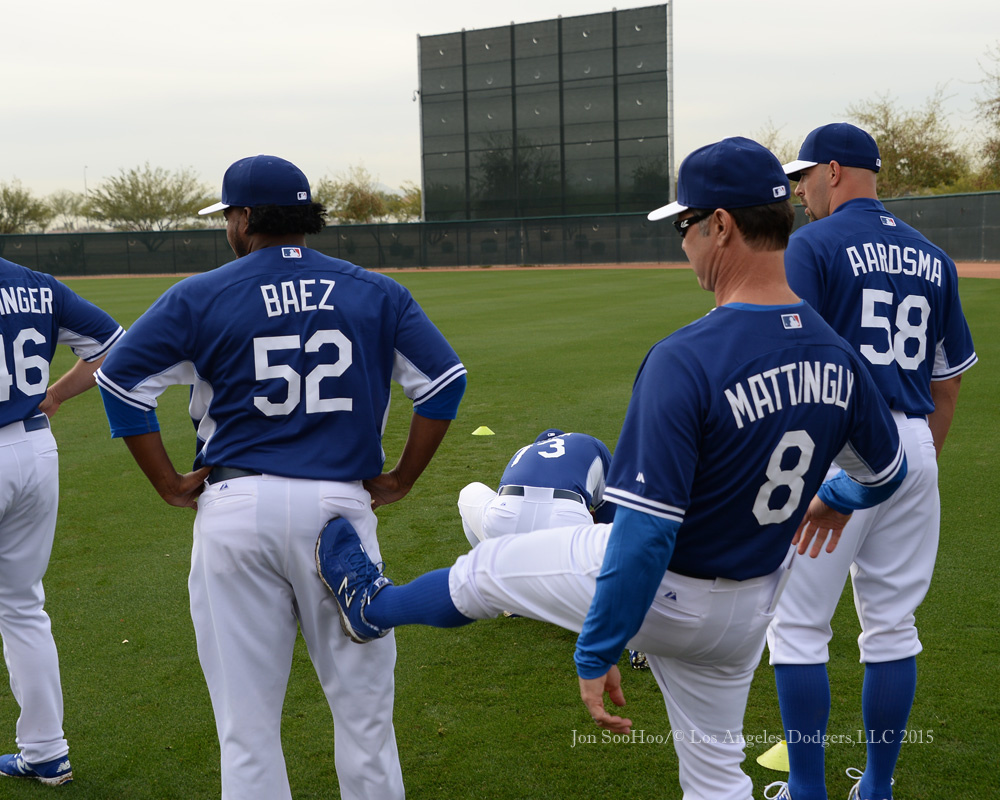 And more from social media …

END_OF_DOCUMENT_TOKEN_TO_BE_REPLACED

In the wee hours, Dodger president of baseball operations Andrew Freidman discussed Wednesday’s exchange of players with the Marlins and Angels. Above is some video, below are some excerpts …

END_OF_DOCUMENT_TOKEN_TO_BE_REPLACED

Just another day in the offseason … Right-handed pitcher Dan Haren has exercised his option to play for the Dodgers in 2015.

His best start came June 30 against Cleveland, when he allowed two baserunners in seven shutout innings on the night the Dodgers moved into first place in the National League West after a 9 1/2-game deficit.

All remaining mystery about Dan Haren’s role in the 2014 National League Division Series has been eliminated. He has been set up as tonight’s long reliever, and Clayton Kershaw has been announced by Don Mattingly as the Game 4 starter.

Nine of Haren’s 11 career relief appearances came 10 seasons ago as a newbie with the Cardinals. The 10th came 2 1/2 years ago in the 14th inning with the Angels, and he pitched a perfect inning. The 11th was in August 2013 with Washington, and he gave up a single while throwing another shutout inning.

In neither of those two recent occasions was he asked to rush into the game. So if Hyun-Jin Ryu got into any trouble early tonight in his first outing in nearly a month, you would no doubt see a short reliever in for damage control, while Haren took his time in the bullpen to get himself ready for the start of an inning.

Haren’s last competitive action came September 27, so he’s on eight days’ rest right now. He had a 2.43 ERA in his final 10 starts of the regular season with 7.6 strikeouts per nine innings and 50 baserunners in 59 1/3 innings. He had seven quality starts out of those 10.

END_OF_DOCUMENT_TOKEN_TO_BE_REPLACED

Dan Haren, to say the least, has stepped up. He has also gone 94 batters since he last allowed a home run.

Dan Haren has a 2.70 ERA in his past four starts

Dan Haren’s third pitch was a microcosm of the fears of Dodger fans. His next 86 pitches summed up all their dreams.

Haren quickly bounced back after a leadoff home run by Curtis Granderson to retire 21 of his final 23 batters, allowing two hits, walking none and striking out six, in the Dodgers’ 6-2 victory over the New York Mets tonight.

With his third strong start in his past four, Haren lowered his ERA over his past 23 1/3 innings to 2.70, with 20 strikeouts and only four walks.

Haren also had a night of extremes at the plate. He bunted into a double play with two on in the third inning, ahead of Dee Gordon’s game-tying RBI, then missed a suicide squeeze in the fifth, before singling home the go-ahead run. Haren leads Dodger pitchers with five RBI in 2014.

Two innings later, the Dodgers took advantage of a key Mets error (sandwiched by Dee Gordon’s MLB-leading 11th triple of 2014 and Matt Kemp’s two-run double for three unearned runs to bust the game open. Gordon was 3 for 5 tonight. A.J. Ellis added an RBI double down the right-field line in the eighth for the Dodgers’ final run.

From the magazine: The quirks that work

Wanted to share this fun feature by Cary Osborne from the August edition of Dodger Insider magazine that looks at the oddities in the pitching motions for such Dodgers as Clayton Kershaw and J.P. Howell. Click on each image below to enlarge the pages. Bottom’s up for the Dodgers

They call it the back of the Dodger starting rotation, Retread City, but look what it’s done lately.

That’s some good stuff there. Dan Haren turned in his second straight solid performance in tonight’s 4-2 victory over Atlanta, the Dodgers’ seventh straight over the Braves dating back to Game 3 of the 2013 National League Championship Series.

Haren and the Dodgers got some great defensive help from Darwin Barney in his first start with the team. Barney also singled in a run and scored another. Carl Crawford, in his first leadoff start of the season against a left-hander, had three hits and is now 8 for his last 12 at the plate.

END_OF_DOCUMENT_TOKEN_TO_BE_REPLACED

Victory march: What comes after four?

So now that the Dodgers have won four games in a row, I’m guessing the next thing you want is five. You fans, you’re so incorrigible.

This year’s Dodgers — whom, it should be noted, haven’t been below .500 all season — are 28-16 (.636) since falling 9 1/2 games behind San Francisco. Earlier today, the Giants ended their six-game losing streak by rallying to defeat Pittsburgh, 7-5.

The Dodgers play only three games over the next 130 hours, and you can make the argument that all that off time couldn’t come at a better time.

With two off days over the next five, Josh Beckett will have six days between starts and Dan Haren will likely be off for at least the rest of the month, if not in a swingman role like Paul Maholm. The earliest the Dodgers absolutely need a fifth starter is August 2, nine days from now and two days after the non-waiver trade dealine.

Haren’s status and whether he might be replaced as the Dodgers’ fifth starter by a trade is drawing major speculation. Since May 1, the 33-year-old righty has a 5.32 ERA and opponents’ OPS of .831, and is allowing a home run every 4.8 innings. And since throwing seven shutout innings of one-hit ball on the last day of June, Haren has lasted 19 innings in four July starts with a 9.47 ERA and opponents’ OPS of 1.012, which is like facing a lineup of nine Mike Trouts.

Here’s what Haren himself told Ken Gurnick of MLB.com:

“I know we talked a while back about off days,” said Haren. “I’ll do anything for the team and if it means I get skipped, I totally understand. I’m not going to march into the office. I’ve got to earn their respect to go back out there.

“It’s really gotten away from me the last four times out. I was having a great year, I felt great throwing the ball, then a few starts ago it kind of snowballed and everything that could go wrong has gone wrong.”

It has to be vexing for Haren that, after allowing four runs in the first inning and a second-inning home run to Travis Snider, he was then able to set down the final 11 batters he faced on four groundouts, six strikeouts and one soft fly out. Though that might seem encouraging, the postgame comments from Haren and Don Mattingly did not reflect that sentiment.

It was the play of the game, early in the game. With David Murphy (who had walked) on second and two out, Miguel Rojas dove to his left to flag a sharp shot up the middle by Michael Bourn off Dan Haren that had RBI stamped and scribbled all over it.

Rojas jumped to his feet and threw to first, and Bourn was called out.

The bad news for the Dodgers: Upon further review, the call was reversed.

The good news for the Dodgers: Cleveland had no more baserunners the rest of the game.

Yes, there but for the grace of replay went the Dodgers’ third no-hitter in six weeks. Really.

But there, thanks to the grace of Clint Robinson, the Dodgers moved into first place in the National League West for the first time since April 24.

Coming to the plate in a scoreless game in the bottom of the seventh inning, after Andre Ethier had tripled with none out and pinch-hitter Hanley Ramirez had been intentionally walked with two out, Robinson grounded a 3-2 pitch almost to the same spot that Bourn hit his ball, but this – Robinson’s first Major League hit – had enough moxie to get through for the RBI that gave the Dodgers a 1-0 victory over Cleveland.

Robinson was batting for Haren, who faced 23 batters and retired all but the aforementioned two, striking out five. Brian Wilson and Kenley Jansen were perfect in closing out the game.

And the Dodgers have won 16 of their past 22 games, gaining 10 games on San Francisco in 22 days.