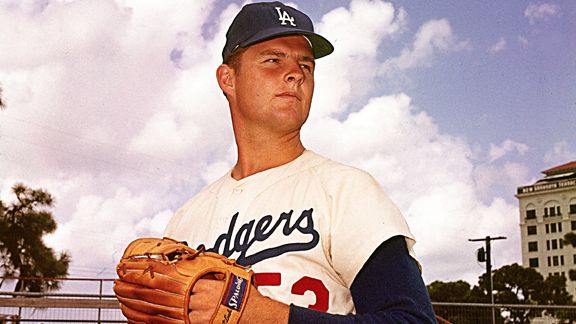 Fifty years ago, this was the hot trade rumor of the day, according to Keith Thursby of the Daily Mirror: Don Drysdale, Gil Hodges and Duke Snider to the Yankees for Tony Kubek, Elston Howard, Ryne Duren and Johnny James. Buzzie Bavasi shot it down. (The link  also takes you to a feature on baseball stats godfather Allan Roth.)

Hodges and Snider were near the end of their careers, but Drysdale was only 23. He was coming off a 3.46 ERA in the 1959 title season, but he ran into a slump, posting a 7.11 ERA in 31 2/3 innings over seven appearances (six starts), only one of them a quality start.

Don Drysdale a Yankee. Gosh, it must’ve seemed like such a good idea to dump the kid at the time. All I need to find is one article calling him a head case or mental midget and my year will be complete.

Update: Adrian Beltre tells Alex Speier of WEEI the story of how he became an underage signee of the Dodgers, and the fallout that ensued. (via MLB Trade Rumors)

Matt Kemp is apparently the first player ever to slump