Will Ryu rule or rue the day?

This pinch-hit Dodger Thoughts post is dedicated to Ron Coomer.

I had come up with my own clever Clayton Kershaw pun for today’s game. But do I get to use it? No. I guess it just wasn’t meant to be. If all goes well, I can use it on Tuesday when Kershaw should make his next start. Oh, and Matt Kemp should start that day too.

And so we come to: END GAME. Oh wait, there are games after this. Regardless, this should be the Dodgers last game in San Francisco unless they meet in a divisional tiebreaker (although it would be more likely that if the teams tied, the Dodgers would host that tiebreaker because they would have to win the season series). Or they could meet in the wild card game if Arizona goes on a 2007 Rockies-like streak. Or they could meet in the Divisional Series. Or in the NLCS.

Down on the farm, Albuquerque is playing Omaha in a decisive fifth game in their PCL semifinal playoff series. In Game 4, the Isotopes scored nine times in the ninth to turn a 10-3 deficit into a 12-10 win, channeling their inner Petaluma Little League. However, Game 5 is shaping up to be worse for the Isotopes. And at the rate that Dodgers players are dropping by the side of the road, the Dodgers could use a few bodies from the Duke City to help out with the big club.

Update: No late-inning magic for the Isotopes. Their seasoned ended with a 16-7 loss to Omaha.

This pinch-hit Dodger Thoughts post is in honor of Lenny Harris.

Enjoy the stylings of Matt Vasgersian and Tim McCarver on this Saturday afternoon on Fox. Get ready to hear Ken Rosenthal say the word “jell” a lot. I’m missing this game because of work, but I think it will be a pain in the aspic.

Matt Kemp, 3 for 29 since he came up second in a battle with the fence at Coors Field, is out for the remaining two games of this series. And potentially more as an MRI on his shoulder is planned, according to Dylan Hernandez of the LA Times via Twitter. Time to reacquaint yourself with the excitement that is Juan Rivera, although don’t be surprised to see Bobby Abreu or Alex Castellanos wandering around left field if the situation with Kemp persists.

The other outfielders on the 40-man roster who could still be recalled include Scott Van Slyke and Matt Angle. Officially, Jerry Sands and Yasiel Puig are on the 40-man roster, but they are both likely off-limits. Elian Herrera, who can play many positions, although maybe not any of them particularly well, could also be recalled.

Tonight’s pinch-hit game chat is in honor of Manny Mota.

The captain has turned on the “Fasten Seat Belts” sign, so please return to your seats. We will be going through some turbulence for the next several hours. We hope to find some smoother air later on.

Ryan Braun, and this is understandable, is getting a day (or at least a start) off before the playoffs. So unless he pinch-hits, his batting average should remain at .333. Jose Reyes grounded out in his first at-bat to fall to .330. Matt Kemp is at .324 as play begins tonight.

Cliff Lee gave up a first-inning home run tonight, meaning that to catch Clayton Kershaw for the ERA title, he now needs to pitch into the 15th inning for the Phillies without giving up any more runs.

Once more unto the breach, dear friends …

Vowing to reject any TV deal that involves the Dodgers with Frank McCourt as owner, Major League Baseball filed a motion requesting the bankruptcy court to order a sale of the franchise.

… Attorneys for the league argued in a court filing that McCourt is using the team’s Chapter 11 case to try to resolve his own personal financial problems. They said he has methodically stripped the team of its revenue sources and is now seeking to auction off the team’s television rights without league approval, which could lead to its expulsion from the league and leave it in economic ruin. …

Bill Shaikin of the Times first reported the story, which included this haymaker of a passage:

… The current Fox Sports contract with the Dodgers expires in 2013, and Fox holds exclusive negotiating rights for another 14 months. A sale of TV rights now not only would subject the Dodgers to significant damages in a lawsuit from Fox, baseball argued, but could result in MLB discipline up to and including the team’s suspension from the league. …

Fancy. Still, before it comes to that, we’ll presumably just see this continued to be played out in court.

More from Shaikin, who spoke with Thomas Salerno, lead attorney for the Phoenix Coyotes during their bankruptcy:

… By announcing its rejection of any deal before a sale could take place, and by signaling its veto of a plan that McCourt could use to pay all the Dodgers’ creditors in full, Salerno said, the league could be seen as not acting in good faith.

“I think MLB runs a risk that the judge says that’s not reasonable,” Salerno said.

Since a settlement in the case is highly unlikely, Judge Kevin Gross could issue a ruling that stands as precedent for other disputes between owners and leagues.

“This case is clearly going to make law,” Salerno said. “The league is going all in.”

With Eugenio Velez starting tonight, a reminder of where he stands:

Last chance to boycott the Dodgers in 2011 … 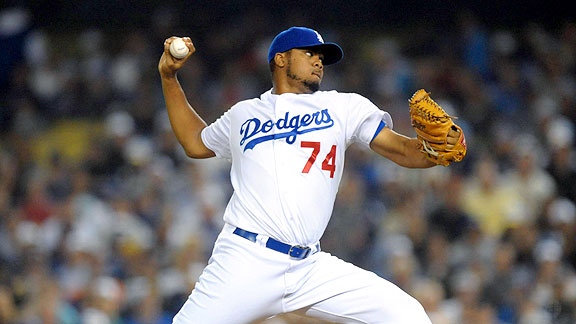 Kirby Lee/US PresswireKenley Jansen has allowed two runs since June, while stranding all nine runners he has inherited.

Keeping this as concise as possible in the interest of time:

It is for these reasons that I hope the Dodgers do not make Kenley Jansen a closer next season.

Tuesday’s victory illustrated why. If Jansen were the closer, Dodger manager Don Mattingly would have held him back until the ninth inning, rather than having him come put out the fire when Clayton Kershaw gave up a home run and two walks in the eighth inning.

It’s far better that Jansen be available at the game’s biggest crisis point, whatever inning that comes.

My hope is that if Mattingly feels he must have a regular closer in 2012, he is seduced by Guerra’s 19 saves in 20 opportunities and keeps him in that slot. Nothing against Guerra, who has been one of the season’s most pleasant surprises, but he is not a smokejumper like Jansen, who looks more capable of putting out the toughest fires than any other Dodger reliever.

… A date for surgery to remove the tumors has not yet been scheduled. Hall underwent a series of tests recently and had a prostate biopsy performed on Sept. 14.

“I was informed by my doctor while in San Diego with the team Saturday,” Hall said. “I am fortunate the disease was caught in the early stages and expect a full recovery. I will use this news as an opportunity to educate and drive awareness, while hopefully saving more lives in the future. I am in great hands, and my family and I are confident we will get through this successfully. I notified all of my staff immediately and am eternally grateful for the overwhelming support, love and prayers.”

Hall underwent a PSA (prostate-specific antigen) test, which resulted in elevated numbers and then underwent the prostate biopsy. That test was diagnosed as positive and revealed cancerous tumors.

Congrats to Mike Petriello of Mike Scioscia’s Tragic Illness – he’s engaged! To his girlfriend! She finally bagged her a Homer.

“How a line drive percentage boost has helped Matt Kemp,” from Mark A. Simon of ESPN Stats and Information:

Matt Kemp hit line drives on 16 percent of the balls he put in play in 2010. He’s upped that rate to 22 percent in 2011 (statistics through Wednesday’s games).

How much of a difference does a six percentage point jump make? Let’s explore:

In our new situation, that would give him 48 hits on 66 line drives

That would give him 24 fewer hits than he has right now.

To account for those 25 balls he hit that we’re no longer considering line drives (91 minus 66), Let’s presume he still hit those balls- but hit flies and grounders.

Kemp has hit fly balls and ground balls this season at nearly the same rate. So let’s give him 13 fly balls and 12 ground balls. And his hit rates on those are such that it should add about 8 hits to his ledger.

In all, that would mean that the increased line drive rate and line drive performance has been worth about 16 hits to Kemp’s ledger.

If we took those 16 hits and turned them into outs, it would chop 30 points off Matt Kemp’s batting average.

On Thursday night, I read a review in the New Yorker (abstracted here and also discussed here) of a new novel, “The Art of Fielding” by Chad Harbach.

In Friday’s mail was a copy of the book, sent to me by my father. Nice.

Ted Lilly, trying to stave off joining the 30-30 club, hasn’t allowed a home run in his past three starts, his longest stretch since April. This season, Lilly has allowed 28 home runs and 33 steals (in 35 attempts).

According to Baseball-Reference.com, there have been 18 pitcher 30-30 seasons since 1950, none since Gavin Floyd of the White Sox in 2008 and none in the National League since Randy Johnson of Arizona in 1999.