Minor-league center fielder Alfredo Silverio, considered by some the Dodgers’ top position-player prospect, will be sidelined indefinitely as he recovers from a serious January car accident in the Dominican Republic. Eric Stephen of True Blue L.A. and Tony Jackson of ESPNLosAngeles.com reported initial details, and Jackson has a follow-up.

… In short, the kid is lucky. From talking to various people (still haven’t been able to talk to Silverio), this is what I have been able to cull: the accident happened on a stretch of road called Curva de la Muerte, which translates to Curve of Death. Apparently, he was going about 60 mph and lost control, the car going off the road and flipping several times. He temporarily lost consciousness, and the car was demolished. …

Meanwhile, Angelo Songco “is expected to miss the next two to three months after having a rod inserted into his lower right leg,” Jackson adds, the results of complications from a 2011 injury. Now 23, Songco had a .948 OPS for Single-A Rancho Cucamonga. 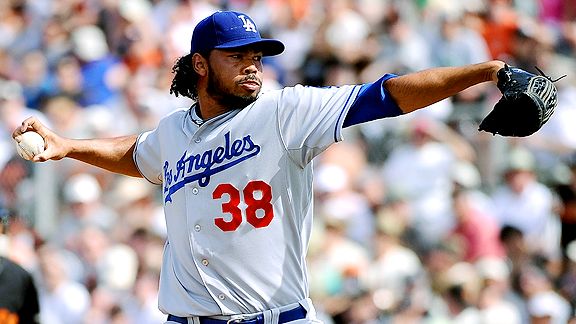 So, by now you know that the Dodger Cogs and Dogs rankings have always been a mixture of subjectivity and objectivity. For today’s batch, there was an additional factor throw into the mix: exasperation.

Fifteen Dodger pitchers have Spring Training ERAs of 0.00, so it’s not exactly a rare feat at this stage of 2010. But it’s fair to tip one’s hat to Ramon Ortiz, who has extended his scoreless string to nine innings (with seven baserunners and 11 strikeouts) after throwing four shutout frames today in the Dodgers’ 4-0 victory over the Angels. 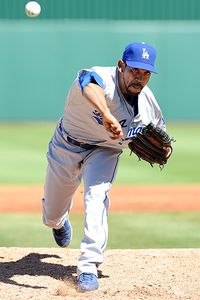 It doesn’t mean that Ortiz will end 2010 a better pitcher than Scott Elbert, who had some soreness about as soon as Spring Training began and was optioned to the minors today with a 20.25 ERA. But it does mean that Ortiz has made himself a very real part of the No. 5 starter conversation, along with fellow 0.00ers Eric Stults, Russ Ortiz and Carlos Monasterios.

I emphasize the word “conversation” because we are still three weeks away from Opening Day, which means we’re still at the talking stage as opposed to the decision stage. The Ortizii also operate at a disadvantage to Stults, Monasterios and Charlie Haeger, all of whom the Dodgers would lose if they’re not on the April 5 roster. As I wrote last month, neither Ortiz (combined age: 73) has had a major-league ERA below 5.00 since 2004. So this isn’t just a question of turning over a new leaf – did they upend the entire tree?

Predictably, there’s all kinds of talk of Ramon Ortiz succeeding by adjusting to his limitations, as seen here in Tom Singer’s MLB.com article this afternoon. Tony Jackson of ESPNLosAngeles.com reports that Ortiz benefited by learning  to throw a curveball in Japan in 2008.  I’m not ruling it all out – nor am I ruling out the possibility that Ortiz will leapfrog the others and earn a spot on the staff in April. I just happen to still have major doubts that we’ll be waxing positive about Ortiz in September.

When Spring Training began, there were at least two spots on the pitching staff open for competition. But now there could be as many as five – if Ronald Belisario begins the year on the restricted list, if Hong-Chih Kuo begins the year on the disabled list and if the team goes with a 12-man staff. (At this point, my bets would be: yes, no, yes.)

There are at least 10 remaining candidates: Ortiz, Ortiz, Stults, Haeger, Monasterios, Jon Link, James McDonald, Josh Towers, Justin Miller and Jeff Weaver. Too soon to say what will happen, but the most intriguing decision might be whether McDonald will be in the Dodger bullpen or the Isotopes starting rotation, alongside Elbert.