Category: Off the field

In Life, Off the field, Podcast Over the weekend, I was fortunate enough to have a conversation for the Word to the Weisman podcast with Micah Johnson, the former Dodger who at the age of 29 has transformed into a full-time artist with growing success. He’s a really interesting guy, and I think you’ll enjoy our  30-minute chat about his unique career journey as well as his thoughts about the landmark year of 2020.

You can listen above, or find Word to the Weisman on your favorite podcast app.

And for more about Johnson, including a look at his artwork, check out his Instagram and Twitter accounts, as well as his website and this one, The Arthlete.

END_OF_DOCUMENT_TOKEN_TO_BE_REPLACED

In Community, Off the field, Pregame, Transactions

Brandon McCarthy has officially been activated from the disabled list by the Dodgers, 14 months and three days after he had Tommy John surgery.

Brock Stewart, who struck out seven while allowing five runs over five innings in a spot start for Los Angeles on June 29, has been optioned to Triple-A Oklahoma City.

In other business, the Dodgers outrighted minor-league pitcher Yaisel Sierra to clear a spot on the 40-man roster. Sierra, a right-hander from Cuba, has been pitching for Single-A Rancho Cucamonga.

Additionally, Layne Somsen has been outrighted, while Ian Thomas was released. Both pitchers had been designated for assignment.

END_OF_DOCUMENT_TOKEN_TO_BE_REPLACED 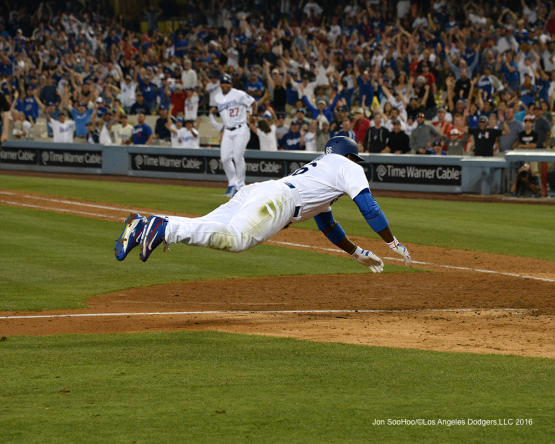 END_OF_DOCUMENT_TOKEN_TO_BE_REPLACED

In Off the field, Profiles Joc and Champ Pederson combined to produce a wonderful, multimedia piece for the Players Tribune on their relationship and their approach to life. It’s a must-read, so go check it out now …

In Celebrities, Off the field, Television

Pat Harrington Jr., the longtime TV performer (“One Day at a Time”), passed away Wednesday at age 86. Harrington graduated from Fordham in 1950 — one year after Vin Scully — and was a guest on the Scully-hosted “It Takes Two” in June 1970.

In Front office, Off the field Erik Braverman has been out in his private life for years, but has kept his sexual orientation from many in baseball. With MLB’s very public embrace of the LGBT community, Braverman wants youth to know they can be out in pro sports.

So reads the subhead from Cyd Ziegler’s story at Outsports about Dodger vice president of marketing and broadcasting Erik Braverman. Here’s an excerpt:

… Inside baseball — even within Dodger Stadium — Braverman held back his private life, his truth, his identity.

“I didn’t want anyone to, in any way, not view me for the quality of my work,” Braverman told Outsports. “I don’t want to be know as the gay executive who happens to run marketing and broadcasting for the Dodgers. I want my accomplishments and my job to be first and foremost and speak for themselves.”

Since starting Outsports in 1999, I had from time to time asked Braverman if it was time yet to share his story. I had met him playing in the L.A. gay basketball league before Jim Buzinski and I had started Outsports, and long before Braverman was working in Major League Baseball. As he ascended the ranks at ESPN Radio and then the Dodgers, I kept on him, a gnat that buzzed in his ear once every couple of years.

It was only minutes before he replied: “I think the time is right.”

There are lots of reasons people in sports come out publicly. Braverman isn’t remotely doing this for himself, content with living his lifelong dream in baseball even if it’s meant some people may ask the occasional question about a missing girlfriend.

For him this is the last step to burying his fears as a kid and helping other LGBT people interested in a career in baseball take the leap. …

It’s a terrific story and one I’m really pleased to share. Read the whole story here.

In Dodger Stadium, Off the field If you’re visiting Dodger Stadium and spy something colorfully unusual in Lot 1 near the Sunset Gate A entrance, that would be the big top for Cirque du Soleil Kurios, which runs from December 10-February 7.

Above is a photo taken before today’s tent-raising; below is a short video snippet of the process.

Curious about Kurios? Here are some facts and figures, provided by Cirque du Soleil …

END_OF_DOCUMENT_TOKEN_TO_BE_REPLACED